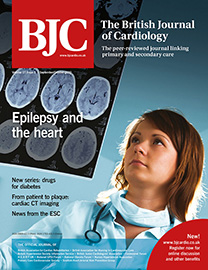 Recent technical developments in multi-detector computed tomography (MDCT), and particularly the introduction of 64-slice MDCT, have made the non-invasive imaging of coronary arteries a clinical reality. Beta blockers are used to decrease the heart rate to 65 bpm, sublingual glyceryl trinitrate (GTN) can be used to dilate the coronary arteries, and the patient is only required to breath-hold for a few seconds. Fast or irregular heart rates, extensive calcium blooming artefacts and patients with high body mass index (BMI) are the only limiting factors. The temporal resolution is faster with dual-source MDCT, reducing the need for beta blockers, and the 320-slice MDCT can image the heart in one heart beat.

Epilepsy and the heart

Cerebrogenic control of cardiac function is well recognised and acute neurological events, including epileptic seizures, may cause a disturbance of cardiac function even in the absence of significant cardiac structural or electrophysiological abnormalities. Sudden unexpected death in epilepsy (SUDEP) is a major cause of mortality in patients with epilepsy. Cardiac dysrhythmias are a potential cause of SUDEP.

Metformin is one of the oldest oral treatments to reduce hyperglycaemia in people with diabetes. Gastrointestinal side effects are common, and metformin should be used with caution in patients with renal impairment because of the slight risk of lactic acidosis. In the United Kingdom Prospective Diabetes Study (UKPDS) patients treated with metformin had a significant reduction in myocardial infarction and mortality that was not demonstrated in patients treated with sulphonylureas or insulin. The fact that metformin significantly reduces cardiovascular events plus reduces weight has meant that metformin is the drug of first choice in guidelines for the treatment of type 2 diabetes. There are no longer concerns about using metformin in patients with chronic heart failure, other than in patients with associated renal failure, or during episodes of acute left ventricular failure when metformin should be temporarily stopped.

The role of cardiac computed tomography (CT) in clinical practice is constantly evolving. Early machines were only capable of measuring coronary calcification. Advances in temporal and spatial resolution, especially the introduction of 64-detector rows, now mean that high-quality non-invasive angiograms are possible in most patients. This review will outline the capabilities and limitations of coronary artery imaging with CT, and also highlight areas that differentiate CT from X-ray angiography, including direct plaque visualisation and potential vulnerable plaque identification.

Ictal bradycardia/asystole is a poorly recognised cause of collapse late in the course of a typical complex partial seizure. Its recognition is important as it might potentially lead to sudden unexpected death in epilepsy (SUDEP). We present five patients with intractable complex partial seizures who had associated ictal bradycardia/asystole. All the patients underwent cardiac pacing to potentially prevent SUDEP. It is important to recognise and treat ictal asystole early, and to achieve this there is need for both an increase in epilepsy monitoring beds and a recognition of the potential role of implantable loop recorders in the evaluation of patients with epilepsy who clinically appear to be at increased risk for ictal asystole.

The National Institute for Health and Clinical Excellence (NICE) has published new guidance on the management of chronic heart failure. This updates and replaces...

News from the 2010 Congress of the European Society of Cardiology

News from the world of cardiology....

Talking to patients: is it really an art or do we take the history for granted?

The British Cardiovascular Society: an overview

Welcome to the first of a regular series of news and reviews from the British Cardiovascular Society (BCS). Many of you will already be...