Recent technical developments in multi-detector computed tomography (MDCT), and particularly the introduction of 64-slice MDCT, have made the non-invasive imaging of coronary arteries a clinical reality. Beta blockers are used to decrease the heart rate to 65 bpm, sublingual glyceryl trinitrate (GTN) can be used to dilate the coronary arteries, and the patient is only required to breath-hold for a few seconds. Fast or irregular heart rates, extensive calcium blooming artefacts and patients with high body mass index (BMI) are the only limiting factors. The temporal resolution is faster with dual-source MDCT, reducing the need for beta blockers, and the 320-slice MDCT can image the heart in one heart beat. 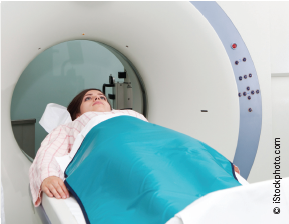 MDCT coronary angiography (CTCA) has been shown to be highly accurate at detecting coronary artery disease (CAD) with more than 30 studies and several meta-analyses confirming excellent sensitivity and negative predictive value (NPV), when compared with invasive X-ray coronary angiography.1 This was confirmed in three multi-centre trials: Assessment by Coronary Computed Tomographic Angiography of Individuals Undergoing Invasive Coronary Angiography (ACCURACY) (n=230), Coronary Artery Evaluation Using 64-Row Multi-detector Computed Tomography Angiography (CORE-64) (n=291), and Meijboom et al. (n=360)2-4 (table 1). The positive predictive values (PPV) have generally been less impressive as the degree of coronary stenosis can appear more severe on MDCT than on invasive coronary angiography. This is the result of the calcium blooming artefacts and the fact that the extent of the positive remodelling of atherosclerosis in the vessel wall is not seen on invasive coronary angiography.

The excellent NPV has led MDCT to become the optimal test to rule out CAD in patients with low-to-moderate likelihood of disease. CTCA is also increasingly used as a second-line test to verify the findings of equivocal functional tests. There are prognostic data identifying increased risk of mortality in symptomatic patients with 50% left main stem or 70% proximal left anterior descending artery stenoses and confirming extremely low risk for patients with normal CTCA.5 MDCT is the method of choice for imaging anomalous coronary arteries and is also used to evaluate coronary artery bypass grafts, adult congenital heart disease, cardiac tumours and the pericardium.

This potential for increased use of CTCA comes with an associated increase in exposure of patients to radiation. This is particularly important in younger women, who receive a higher equivalent dose (25%) because of the breast tissue, and who frequently have equivocal exercise-tolerance tests. Significant progress has been made to lower the radiation dose, with electrocardiographically controlled tube current modulation (ECTCM) during the cardiac cycle reducing the dose by 25%. However, this is not sufficient for the younger patients. Einstein et al. calculates the risk for future cancer from a CTCA with ECTCM (14 mSv) in a 20-year-old woman to be one in 219 compared with one in 715 in a 60-year-old woman and one in 1,911 in a 60-year-old man (9 mSv).6 The radiation dose can be reduced by a further 40% by reducing the output of the CT X-ray tube, from 120 to 100 kVp, for patients with a BMI lower than 30 kg/m2. Furthermore, each reduction of the scan length by 1 cm reduces the dose by 1 mSv. Raff et al. reported a reduction in the median effective radiation dose from 21 to 10 mSv in 15 hospitals in the state of Michigan with the application of the above dose reduction techniques.7 However, the most effective way to lower the radiation dose is prospective electrocardiogram (ECG)-triggering, where the acquisition is limited to 10% of the cardiac cycle at end-diastole. This reduced the dose to an average of 2.1 mSv, compared with an average of 4.4 mSv for invasive coronary angiography, in a recent comparative study.8 This method is only suitable in patients with regular heart rates, ideally below 60 bpm.

A less commonly employed method, which lowers the radiation dose by 40%, is reducing the scanning field of view with a bow-tie filter to scan just the heart and exclude the lungs. Including the lungs in the scan not only increases the radiation dose but there is also a high incidence of incidental findings, the vast majority of which are of no clinical consequence. The most frequent incidental findings are small solid nodules, which require follow-up with up to four additional CT scans, based on the Fleishner society criteria, incurring significant additional cost and radiation.9 Such lung screening with CT has not been shown to be clinically effective or cost-effective in patients with a history of heavy smoking, and, hence, is unlikely to be useful in a population with low-to-moderate probability of CAD.10

The role of CTCA

CTCA has been shown to be clinically effective and the fast acquisition time should translate into low cost, compared with other non-invasive tests. The evidence is in favour of more utilisation of CTCA, and the recnt National Institute for Health and Clinical Excellence (NICE) guidance on chest pain11 has endorsed the use of MDCT as a rule-out test in patients with low-to-moderate probability of CAD. However, these patients are often relatively young and/or female and, as the use of CTCA increases, it is vital that all the radiation dose-lowering strategies are utilised and that referring physicians are aware of the radiation dose and the uptake of such strategies in their local CTCA service. This is particularly important in the light of the Prospective Multi-centre Study on Radiation Dose Estimates of Cardiac CT Angiography in Daily Practice (PROTECTION 1),12 an observational study of the radiation dose in 50 CTCA sites, reporting a six-fold variation in dose between sites, which was directly related to the utilisation of the dose-reduction techniques, and the recent data from the USA highlighting the high cumulative radiation dose in non-elderly patients, particularly in women, from medical imaging.13 Low radiation dose CTCA is clinically effective and likely to be a cost-effective test and should have its place in a cost-conscious national healthcare service. Future guidance should recommend the use of low radiation dose protocols and future cost-effectiveness studies of CTCA should consider the cost of the additional investigations as a result of the incidental lung findings.1,9

KA: None declared. MB has received speakers honoraria from GE.

Should invasive coronary angiography be performed by non-cardiologist operators?