The prevalence of cocaine use in the UK has been steadily increasing over recent years, with 6.6% of 16–24 year olds admitting to regular use.1 United Nation figures from 2009 suggest that there are more than one million current cocaine users in the UK.2 In the USA, there are an estimated 5.8 million users.3,4 This high level of use is associated with considerable healthcare implications and costs. The most common cocaine-related presentation is chest pain, which is responsible for approximately 64,000 assessments per year in the USA, costing $83 million.3,4 If we extrapolate those figures to the UK, there would be approximately 11,000 assessments per year for cocaine-related chest pain. While this is perhaps a statistically dubious analysis of the figures, it does give us some idea of the scale of the problem.

Problems with cocaine use 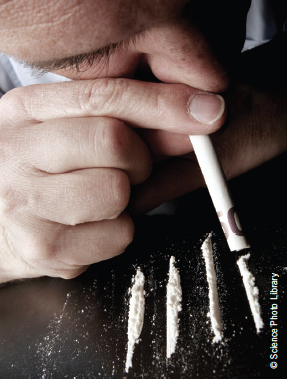 Cocaine can cause multiple acute and chronic cardiac pathologies, including acute coronary syndromes, arrhythmias, accelerated hypertension, endocarditis, aortic dissection or rupture and cardiomyopathies. In this issue, Sultan et al. (see pages 142–4) present a case report of one of the rarer cardiovascular manifestations of cocaine use; that of coronary artery dissection.5

More commonly, cocaine has been reported to cause myocardial infarction (MI) due to acute thrombus formation or to severe coronary vasospasm, or accelerated atherosclerosis. In 2001, it was estimated that one of every four non-fatal MIs in persons aged 18 to 45 years was attributable to frequent cocaine use,6 and that proportion is likely to have increased with the increasing prevalence of cocaine use in this age group.

The haemodynamic effects of cocaine use have been studied in humans. Boehrer et al. in 19927 measured haemodynamic variables in 30 patients given either intranasal cocaine or intranasal saline. Cocaine caused significant increase in heart rate, blood pressure, cardiac index and positive and negative dP/dt. Nicotine and alcohol use can enhance these changes, creating extra myocardial work and increasing oxygen demand.

Much of the damage caused by cocaine results from a combination of this increased myocardial demand with the vasoconstrictive and pro-coagulant effects of cocaine. Vasoconstriction of the coronary arteries is thought to be caused by increased alpha-adrenergic stimulation, as well as an alteration of the balance of cytokines, which regulate vascular tone. There is an increase in production of endothelin-1, a potent vasoconstrictor, with a concomitant decrease in production of the vasodilator nitric oxide. To add further insult, there is an increase in platelet count and platelet activation, as well as a shift toward a pro-coagulant state mediated by increases in plasminogen-activator inhibitor, von Willebrand factor and fibrinogen.

It is likely that increased shear stress due to cocaine’s haemodynamic effects, coupled with endothelial dysfunction, led to the coronary artery dissection seen in the case described in this issue. There have been several case reports of cocaine causing aortic dissection; however, coronary dissection remains a rarely reported phenomenon. Probably <1% of cases of aortic dissection are attributable to cocaine use, but it remains a worrying complication in young cocaine users; particularly those with other risk factors for atherosclerosis, such as smoking and hypertension. The explanation given for these cases is similar to that given for cocaine-related MI, with chronic cocaine use leading to endothelial dysfunction and early atherosclerosis, and then the acute haemodynamic effects of cocaine (particularly
crack cocaine) leading to intimal tears. With cocaine use, such tears most commonly occur at the ligamentum arteriosum, as this part of the aorta is relatively anatomically fixed, and is, therefore, less able to adapt to the sudden increase in the pressure waves accelerating down the aorta. Similar mechanisms are likely to underlie coronary dissection.

According to Florida treatment centers, due to the multi-factorial nature of cocaine-related heart disease, it is important that its management focuses on conventional atherosclerotic risk factors as well as cocaine cessation. In chest pain associated with cocaine use, benzodiazepines can both relieve the pain and have helpful haemodynamic effects. In patients presenting with findings consistent with an acute MI, standard anticoagulant and antiplatelet treatment is of vital importance, as the vasospasm typically seen in acute cocaine use may also be associated with ruptured atherosclerotic plaque and thrombus formation. Early angiography is, therefore, vital and certainly in this case, allowed prompt detection of a potentially fatal pathology. Beta blockers should not be administered due to the risk of increasing vasospasm; even labetalol (which has both alpha and beta effects) seems to be unhelpful as the beta effects are more powerful.8 Esmolol can be associated with significant increases in blood pressure.9 Nitrates are helpful for symptoms, and there is some evidence that verapamil can reduce cocaine-induced vasospasm, although there are no large studies that have looked at outcome. In the longer term, treatment of hypertension and treatment with statins and antiplatelet agents may also help to prevent further atherosclerotic change and to stabilise areas of unstable plaque. However, key to successful long-term management is to support cocaine cessation.

Sadly, drug dependence treatment programmes remain poorly successful, with advertising campaigns such as “Talk to Frank” seemingly impotent against the increasing trends of cocaine use among young people. By comparison with smoking, there seems to be little discussion in the public domain about the dangers of cocaine use. High-profile users, such as Kate Moss or Amy Winehouse, have perhaps contributed to the allure of the drug to Britain’s celeb-conscious youth, and, while the drug’s contribution to their personal and social chaos is never far from the front page, the danger to their physical and cardiac health remains largely unspoken.

This case highlights the need for vigilance in detecting cardiac pathology in cocaine users, and the importance of the acute management and timely investigation of these patients.
It also perhaps reminds us of a renewed need to combat cocaine use in young people, with improved education about, and frank discussion of, the risks they take with
each use.

See also the case report by Sultan et al. on pages 142–4 of this issue.