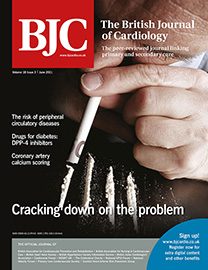 Cracking down on the problem

The prevalence of cocaine use in the UK has been steadily increasing over recent years, with 6.6% of 16–24 year olds admitting to regular use.1 United Nation figures from 2009 suggest that there are more than one million current cocaine users in the UK.2 In the USA, there are an estimated 5.8 million users.3,4 This high level of use is associated with considerable healthcare implications and costs. The most common cocaine-related presentation is chest pain, which is responsible for approximately 64,000 assessments per year in the USA, costing $83 million.3,4 If we extrapolate those figures to the UK, there would be approximately 11,000 assessments per year for cocaine-related chest pain. While this is perhaps a statistically dubious analysis of the figures, it does give us some idea of the scale of the problem.

The National Institute for Health and Clinical Excellence (NICE) has issued guidance on the investigation of patients with recent onset of chest pain, recommending CT calcium scoring (CAC) as the preferred test in some low-risk groups. This reflects concern about the low sensitivity (high false positive rate) of exercise stress tests (EST). This represents a major shift away from traditional rapid-access EST clinics and has generated concern. We looked at 125 consecutive ungraded patients with equivocal ESTs referred for CAC, and CT coronary angiography (CTA), if required. We found that 53% of patients had a CAC = 0 and would need no further testing under the NICE protocol. We estimate this would rise up to 70–80% if only low likelihood patients were studied. Two per cent of patients with a CAC = 0 required coronary intervention.

As per NICE protocol, all patients with a CAC between 1 and 400 underwent CTA, and, of these, 25% required invasive coronary angiography (ICA) and 17% underwent coronary intervention.

The overall strategy of CAC followed by CTA (if CAC between 1 and 400) and ICA (if CAC >400) produced a final sensitivity of 88% (higher than EST) and a negative predictive value of 98% (similar to EST). We believe the strategy is a useful way to assess recent onset chest pain but concerns about radiation dose, availability and patients with obstructive non-calcific plaque remain.

We analysed an epidemiological database of hospital admission and day-case statistics, constructing cohorts of people admitted for care for varicose veins or haemorrhoids, and comparing their experience of subsequent circulatory diseases with a control cohort. Compared with the control cohort, there was an elevated risk of deep vein thrombosis (DVT) in the varicose veins cohort (rate ratio 1.20; 95% confidence interval 1.08–1.33) but not in the haemorrhoids cohort (0.90; 0.78–1.03). No other circulatory diseases showed significantly elevated risks associated with varicose veins or haemorrhoids. The rate ratio for coronary heart disease in the varicose veins cohort was 0.91 (95% confidence interval 0.88–0.95) and that in the haemorrhoids cohort was 0.98 (0.94–1.03).

We conclude that neither varicose veins nor haemorrhoids showed strong association, either positive or negative, with other circulatory diseases. There was a significant, but numerically modest, elevated risk of DVT associated with varicose veins. The risk of coronary heart disease in people with varicose veins was, if anything, a bit low.

The dipeptidyl peptidase-4 (DPP-4) inhibitors are a new class of oral drugs for the treatment of type 2 diabetes. They inhibit the breakdown of glucagon-like peptide-1 (GLP-1) and increase the incretin effect in patients with type 2 diabetes. In clinical practice they are associated with significant reductions in HbA1c, no weight gain and a low risk of hypoglycaemia. Initial cardiovascular safety studies have shown no increase in cardiovascular risk. Indeed, the suggestion of possible cardiovascular benefit seen in the safety studies is now being formally examined in large randomised-controlled trials with primary cardiovascular end points.

Persistent hyponatraemia is common in ambulatory HF patients in the community and is associated with worse clinical outcomes. It is also an independent predictor for mortality and HF hospitalisations. General practitioners are uniquely positioned to identify patients with hyponatraemia and ensure regular monitoring and appropriate referrals are instigated.

Mitral valve stenosis (MS) is attributed mainly to rheumatic fever and may remain unrecognised for several years. Early diagnosis of this lesion is important in order to implement the necessary management when either severe or complicated by atrial fibrillation. However, its incidence in a multi-ethnic community has not yet been recognised. We retrospectively studied 2,099 consecutive subjects for the presence of MS. All the patients were newly referred by general practitioners to a community general cardiology clinic and hypertension clinic in a district of London because of different cardiac symptoms, significant cardiac history or because of uncontrolled hypertension. All the patients underwent echocardiography routinely. Classical clinical signs of MS were present in four patients. Echocardiography showed MS in eight patients, in four of whom the MS was mild, moderate in three and severe in one patient. None of the patients had symptoms related to the MS and all were in sinus rhythm both clinically and during Holter monitoring. Only one patient was Caucasian, two were of Caribbean origin and five were of Indo-Asian origin. Subsequent cardiac catheterisation and mitral valve replacement were successfully carried out in two patients. It is concluded that rheumatic MS is still prevalent in the UK population and is more common in subjects of Indo-Asian origin than either Caucasian or Afro-Caribbean subjects. MS was not recognised by the general practitioners: its diagnosis was only made possible by echocardiography.

News from the American College of Cardiology Scientific Session 2011

News from the world of...

Physician heal thyself? Not on your nelly

In this fifth article from the British Cardiovascular Society (BCS), Professor Keith Fox, BCS President, looks to the future of a changing healthcare...

A report from the first training day of the British Heart Valve Society, held recently at the Royal Society of Medicine,...

News from the world of...