Occupational radiation exposure in fluoroscopy-guided procedures is highest among medical staff, particularly cardiologists involved in interventional procedures. The danger of radiation-induced cataracts in operators, and the suggestion of a higher incidence of malignancy among interventional cardiologists, have led to a significant focus on radiation safety in the cardiac catheterisation laboratory. We examined our mean eye and tibia dosimeter reading trends between 1993 and 2011 (among different sub-specialised cardiologists), and the impact of shin tibia lead protectors. During the period 1993 to 2011 there was a steady decline in radiation doses. The dosimeter readings level fell from a peak of 34 to 6.0 mSv per year and 29 to 1.0 mSv per year at the eye and at the tibia, respectively. Interventional and electrophysiology/pacing cardiologists tend to have a trend of higher radiation doses at the tibia level as compared with non-interventional cardiologists. The introduction of shin leg protectors further reduced radiation exposure from a peak of 6.0 mSv per annum in 2008 to ≤1.0 mSv per annum. Radiation safety awareness and policies have led to a significant fall in operator radiation exposure. The shins, not protected by conventional lead aprons, receive a significant exposure. We have demonstrated that the routine wearing of shin protectors reduces radiation exposure to a minimal level. 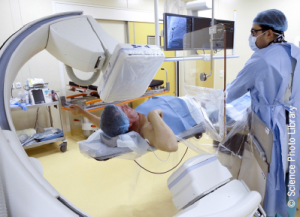 Occupational radiation doses in fluoroscopy-guided interventional procedures are highest among medical staff using X-rays, particularly cardiologists involved in interventional procedures.1 The danger of radiation, such as radiation-induced cataracts in operators,2 has led to a significant focus on radiation safety in the cardiac catheterisation laboratory. Garments, lead goggles, skull caps, ceiling suspended shields, curtains under the table, and other protective equipment, provide a significant reduction in occupational doses.3 It is necessary for cardiologists to wear personal dosimeters during procedures for personal safety, in order to monitor individual radiation exposure, to stay within recommended limits. The International Commission on Radiological Protection (ICRP) and the American College of Cardiology (ACC) recommend one worn outside the apron (on the left shoulder/neck), and the other worn under the apron at the waist, to ensure that the doses to total body are within limits. The current international recommendation is a maximum effective dose of 50 mSv per year and 100 mSv in a consecutive five-year period,4 which is equivalent to 2,500–5,000 chest X-rays and 23–46 times more than the average person receives from natural ionising radiation (2.2 mSv a year). Currently, the UK Ionising Radiations Regulations 1999 (IRR99) from the Health and Safety Executive (HSE) limits the effective whole body dose to 20 mSv per annum.5 The dose limits to the eye and tibia are 150 mSv and 500 mSv per annum, respectively.5

Studies have shown that radiation doses to the legs of interventional radiologists were likely to be greater than those to the hands, particularly when specialised lead protection was not used because of scattered radiation.6 Among interventional cardiologists, there have been reports of leg hair loss secondary to chronic occupational radio-dermatitis.7 We present here our mean dosimeter readings from extremity monitors for the eye lens and the tibia over an 18-year period (1993–2011) among different sub-specialised cardiologists, demonstrating differences in radiation exposure and the importance of shin protectors in reducing radiation exposure, especially as the shins are often ignored and are not protected by conventional lead aprons.

Our unit is a secondary/tertiary referral centre performing a full range of diagnostic and therapeutic procedures with a catchment population of 1.5 million. The department opened in 1993, performing diagnostic angiograms and pacemaker procedures, and started its percutaneous coronary intervention (PCI) programme at the end of 1993. Complex electrophysiology, such as atrial fibrillation ablation, was developed in 2005. The review analysed the dosimeter readings from 16 consultant cardiologists, each joining the department at different time periods (1993–2011). In 1993, table-mounted radiation lead-rubber shields were installed in our labs, and in 1997, ceiling mounted lead glass was also made available. Our standard policy is to wear body garments, thyroid protectors and lead goggles. In 2006, we introduced shin tibia lead protectors, which were adopted in 2007–2008 by all consultant cardiologists. The mean dosimeter readings from the eye lens and tibia monitors were divided into interventional (n=8), cardiac rhythm management (electrophysiologist (EP)/pacing) (n=4) and non-interventional cardiologists (n=4) (imaging and heart failure cardiologists who also perform diagnostic angiograms).

During the period 1993–2011 there was a steady decline in received radiation doses. The dosimeter readings fell from a peak of 34 to 6.0 mSv per year and 29 to 1.0 mSv per year at the eye and at the tibia, respectively. For the interventional cardiologists, there has been a steady reduction in eye doses over time, such that these are now only marginally higher than those received by the EP/pacing specialists or those doing diagnostic angiograms. The interventional and EP/pacing cardiologists had higher radiation doses at the tibia level as compared with the non-interventional cardiologists, but these have fallen dramatically over time (figures 1A and IB). The introduction of shin protectors has further reduced radiation exposure from a peak of 6.0 mSv per annum in 2008 to ≤1.0 mSv per annum. The average body doses measured under the lead aprons over the 18-year period were minimal
(0.0–1.0 mSv equivalent dose).

Overall, our historical radiation dose data show that radiation safety awareness and departmental policies have resulted in a significant decline in radiation doses. Unfortunately, we do not have a complete record of the screening time for the 18-year period, which would be interesting and may offer some explanation of the reduction in radiation exposure reported. However, novel complex EP and devices procedures, such as atrial fibrillation ablation and cardiac resynchronisation therapy (CRT), which are more time consuming and required more screening time, started around 2006 and did not appear to increase radiation dose at the eye level (probably because of the presence of the eye shields), but perhaps led to a small rise in radiation dose at the tibia level, which was nullified by the use of shin protectors introduced between 2007 and 2008 (figure 1).

Our data emphasise the important role of shin protectors for radiation safety. As a result of the introduction of shin protectors, and the resultant fall in radiation dose to a minimal level, our institution has now stopped using radiation monitors at the tibia level, which results in a saving of at least £3,000 per year.

Radiation safety awareness and departmental policies have led to a significant fall in operator radiation exposure over the past two decades. The introduction of various protector devices has reduced operator doses over time, but the radiation doses received by the lower legs are often ignored. We have demonstrated that the routine wearing of shin protectors reduces radiation exposure to a minimal level. Our institution has now stopped routine monitoring at the tibia level on advice from our regional medical physics department.