National Institute for Health and Care Excellence (NICE) CG95 guidelines recommend a diagnostic algorithm based on pre-test probability of significant coronary artery disease (SCAD). We hypothesised that these probabilities overestimate the risk of SCAD in our population leading to unnecessary invasive coronary angiography.

Data were collected prospectively for

every adult patient attending the rapid access chest pain clinic (RACPC) at a South London acute general hospital from 1 April 2012 to 31 March 2013. SCAD was defined as a luminal narrowing of ≥70% in a major coronary artery or >50% in the

We conclude that NICE prediction tables overestimate the risk of SCAD in our patient population. We recommend that the risk tables be updated to represent contemporary patient cohorts in order to reduce the number of potentially unnecessary angiograms. 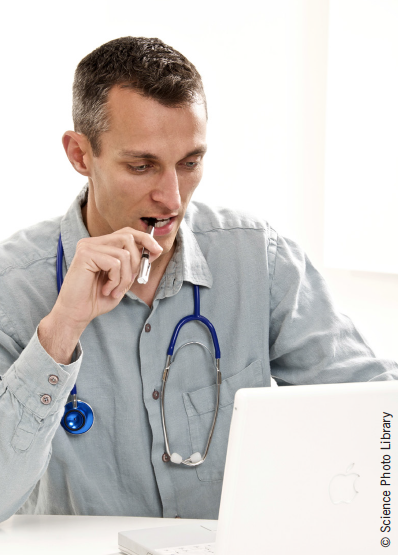 Angina pectoris is most often due to obstruction to flow in the epicardial coronary arteries, and the ‘gold-standard’ investigation, to date, to detect this, has been invasive coronary angiography.2 A small proportion of patients may have angina with unobstructed coronary arteries secondary to either microvascular coronary disease or coronary spasm.3 Functional ischaemia is not routinely tested for during standard invasive coronary angiography, and so an assumption is made that a lesion of a particular magnitude – a stenosis of greater than anywhere between 50% and 75% in the literature4 – will induce ischaemia in the territory subtended distal to that stenosis.

Coronary angiography is an invasive procedure, and, as well as being expensive, carries a one in 1,000 risk of stroke, non-fatal myocardial infarction (MI) and death.5,6 Non-invasive investigations, looking at coronary anatomy or myocardial perfusion or ischaemia, reduce these costs and risks.4,7 Therefore, non-invasive investigations such as coronary computed tomography (CT) angiography, stress echocardiography and nuclear myocardial perfusion studies are increasingly recommended in international guidelines.7,8

The National Institute for Health and Care Excellence (NICE) use cost and clinical effectiveness analyses to determine the modality of investigation given a pre-test probability of significant coronary artery disease (SCAD), determined by age, gender, typicality of symptoms and cardiac risk factors. These probabilities are based on the Diamond and Forrester model published in 1979 that looked at prevalence of SCAD based on typicality of symptoms in 4,592 patients undergoing coronary angiography, together with prevalence of SCAD based on age and gender from autopsy data from 23,996 subjects aged between 30 and 69 years.9 While this population was predominantly Caucasian, and, therefore, similar to our patient cohort, they would not have been privy to the public health and primary prevention measures available today. NICE use a modified version of the original Diamond and Forrester pre-test probability table by accounting for risk factors. They use data from the Duke University group’s cohort study to generate probability coefficients for smoking, hyperlipidaemia and diabetes to adjust the pre-test probabilities into ‘high-risk’ and ‘low-risk’ groups.10 These data were based on 168 patients attending the Duke outpatient angiography service, 69% of whom were male and with a mean age of 56 years.10

We hypothesised that in our contemporary, predominantly elderly, white, European population, these pre-test probabilities overestimate the prevalence of SCAD, especially in the 61–90% probability group, for whom invasive coronary angiography is recommended as the preferred diagnostic modality.

Patients attending the rapid access chest pain clinic (RACPC) in the Princess Royal University Hospital, a nurse-led, consultant supported service, have been assessed and treated in accordance with the NICE guidance since October 2010. The Princess Royal University Hospital is an acute general hospital in South East London serving a population of around 300,000. The catchment area has an elderly and relatively affluent cohort of patients.

Our data are audited annually to demonstrate compliance with the NICE guidelines.

All patients in the database who underwent coronary angiography were included in the final analysis.

The clinical assessment and the typicality of anginal pain features, together with age, gender and risk factors, were used to estimate the likelihood of coronary artery disease according to the NICE CG95 table of pre-test probabilities.4 Patients were classified as ‘high risk’ or ‘low risk’ depending on their cardiovascular risk factors, namely diabetes, smoking, hyperlipidaemia (cholesterol >6.47 mmol/L), or if they had resting electrocardiogram (ECG) changes, namely ST–T wave abnormalities or Q-waves.4

All angiograms performed were reviewed and reported by a consultant cardiologist. The reporting cardiologist was not blinded to the calculated pre-test probabilities. SCAD was defined as a luminal narrowing, by visual assessment, of >50% in the left main stem (LMS) or ≥70% in one or more of the major epicardial coronary arteries, in line with NICE and European Society of Cardiology (ESC) guidelines.4,7

The percentage of positive results in each probability bracket was compared with the lowest expected percentage in that bracket. For example, we tested the one-sided hypothesis Ha: p<0.61 against the null hypothesis p=0.61 for angiograms performed in the 61–90% pre-test probability group. Assuming a normal approximation to the binomial distribution, all tests of significance and confidence intervals were performed using a z statistic. Where the normal approximation could not be taken (when r, or n – r were <5) then the sample size was considered too small to be statistically relevant and tests of significance were not performed.

If patients had a non-anginal presentation and there was no raised suspicion of coronary artery disease from the history or ECG findings, then a score was not calculated: 27% (n=148) fell into this category. The complete breakdown of patients falling into each bracket of pre-test probability is shown in figure 2. These correlate well with the national data as stated in the NICE Costing Report,11 shown in table 1.

There were 150 patients referred for invasive coronary angiography across all risk groups, of which six were either cancelled or did not attend their appointment, and reports were unavailable for four patients. The proportion referred in each risk bracket is shown in figure 3.

Patients undergoing angiography had a mean age of 63.7 years and 37.9% were female. Of these, 59% had typical symptoms, 37% had atypical symptoms and 4% had non-anginal symptoms. There were 70% classified as ‘high risk’ according to their risk factors, which included smoking, diabetes and cholesterol of greater than 6.47 mmol/L, or if they had ischaemic changes on ECG.

The prevalence of SCAD was evaluated in individual subgroups that comprised the final pre-test probability score: gender, age, typicality of symptoms and ‘high-risk’ or ‘low-risk’ categories. The results are shown in table 3. No individual component had a significant impact on angiographic outcomes, although there was a non-significant trend for males to be more likely to have SCAD compared with females, despite the corrections made for this in calculating pre-test probability. The sample size in the non-anginal category was too small to make valid comparisons.

Our results show that use of the NICE risk probabilities in our patient cohort overestimates the risk of SCAD in the intermediate- to high-risk groups (those with over 61% likelihood of angiographically significant stenosis).

The NICE Clinical Guidelines Committee used published economic data and set up economic models that indicated that first-line invasive coronary angiography was the most cost-effective strategy for investigation when the prevalence of CAD was over 60%.4 Our data suggest that only those in the very highest risk category would satisfy this requirement. Therefore, the use of existing prediction tables not only puts patients through undue risk, but also reduces the cost-effectiveness of delivering care.

No individual component of the pre-test probability calculation (age, gender, typicality of symptoms, or cardiac risk factors) predicted an increased chance of SCAD. This remained true even in the significant number of elderly patients in our study. This does not suggest that these factors do not predict SCAD, but that they have already been accounted for in calculating pre-test probability and, therefore, in selecting the study population. It does suggest, however, that none of the factors confer the risk expected, and the overestimation of pre-test probabilities occurs uniformly across the patient groups.

Recent efforts have been made to acquire contemporary data for predicting SCAD. The CAD Consortium published a large, multicentre cohort study in 2011 that aimed to validate and update the Diamond and Forrester model and is the basis for the prediction tables in the ESC guidelines for stable coronary artery disease.7,13 Although the risk estimates are more conservative than those used by NICE, these probably still overestimate risk as the data are based on a high-risk population that were pre-selected to undergo coronary angiography. Furthermore, no account is taken of cardiac risk factors in this score.

There are several limitations to our study. It is a single-centre study, so generalising our data should be done with caution. We have tried to address the problems of external validity by demonstrating compliance with the NICE guidelines. We have published the demographic details of our patient cohort but have not accounted for other factors such as socioeconomic status and diet.

Categorising patients for typicality of chest pain was done using a rather coarse three-point score as described by NICE, but this may not have captured all the nuances of the clinical history. It is possible that a more refined clinical history may have led to more accurate pre-test probabilities.

The reporting consultant was not blinded to the pre-test probability, potentially introducing bias into the estimate of luminal stenosis. A second consultant opinion was sought in borderline cases, but not routinely for all cases, so the data were susceptible to subjectivity.

Other limitations stem from the use of coronary angiography. It is increasingly accepted that angiography supplemented with a functional assessment, such as fractional flow reserve (FFR), is superior to angiography alone in interpreting the significance of a luminal stenosis.7,14 Estimating the significance of stenosis on angiography is non-standardised, subjective, and prone to inter-observer and intra-observer error. Moreover, microvascular disease and coronary vasospasm, both of which can cause angina, are not detected by standard coronary angiography.

These problems lead to a wider issue regarding the role of coronary angiography in stable coronary artery disease for diagnosis and prognosis. The NICE guidelines focus on diagnosis, with the aim of elucidating whether chest pain of recent onset is cardiac in origin or not. A sufficient post-test probability may be generated by non-invasive tests alone for a diagnosis. Angiography would then be limited to those cases where non-invasive investigations prove equivocal. Another use of angiography, not directly addressed in the NICE guidelines, but mentioned in the ESC guidelines, is for prognosis, and where revascularisation is being considered. From the evidence to date, patients with stable angina that would benefit from revascularisation are those with lesions in the left main stem (LMS) or proximal left anterior descending (LAD), those with impaired left ventricular (LV) function and two- or three-vessel disease, those with >10% inducible ischaemia on functional testing, and those with limiting symptoms despite optimal medical therapy.15 These data can be gathered from anatomical and functional tests. A decision on performing angiography can then be made if revascularisation is being considered. This focused approach would greatly reduce the need for diagnostic coronary angiography.

In summary, our findings suggest that current practice commits us to overusing invasive coronary angiography. Both the NICE pre-test probability tables and the diagnostic algorithms based on these pre-test probabilities need to be revisited to reduce cost and improve patient care.

A multi-disciplinary care pathway improves symptoms, QoL and medication use in refractory angina