Current European Society of Cardiology guidelines state that in troponin-negative acute coronary syndrome with no ST-segment change on electrocardiogram (ECG), a stress test is recommended. In the UK, exercise tolerance testing (ETT) is currently the most common first-line test. The high proportion of false-positive and inconclusive results often mandates second-line tests. We compared the diagnostic accuracy and cost implication
of computed tomography coronary angiography (CTCA) as first-line investigation compared with ETT. We hypothesised that CTCA would outperform ETT because of its excellent negative-predictive value.

Our results suggest that it is feasible to use CTCA to investigate patients with acute low-to-intermediate likelihood chest pain in place of ETT at no extra cost. Moreover, this cost analysis only took into consideration the actual cost of investigation. Three US clinical trials have shown that CTCA in the emergency room can substantially reduce patient length of stay, reducing overall cost further. CTCA also recognises non-obstructive coronary atheroma, which, combined with clinical risk factors, may prompt the physician to initiate secondary prevention medication earlier.

Multi-detector computed tomography coronary angiography (CTCA) is becoming increasingly available in UK Hospitals. The National Institute for Health and Clinical Excellence (NICE) clinical guideline 95, released in 2010, recommended the use of calcium score ± CTCA in patients with low likelihood chest pain of recent onset.1 American College of Cardiology (ACC)/American Heart Association (AHA) appropriateness criteria for CTCA recommend its use in patients with low or intermediate likelihood chest pain.2 The rationale for the recommendations of CTCA is its excellent negative-predictive value.3 A further important point is that functional imaging tests may exclude the presence of ischaemia but not the presence of coronary artery disease (CAD). CTCA will rule out significant CAD (<50%) reliably, but may demonstrate the presence of milder degrees of CAD in some of the patients. Recent data from the Coronary CT Angiography Evaluation for Clinical Outcomes: An International Multicenter Registry (CONFIRM) registry demonstrated that these patients are at an increased risk of future events and, hence, should benefit from secondary prevention.4 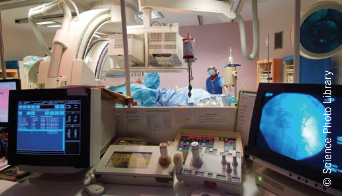 Current European Society of Cardiology (ESC) guidelines state that in troponin-negative acute coronary syndrome with no ST-segment change on electrocardiogram (ECG), a stress test is recommended. In patients with significant ischaemia during the stress test, invasive coronary angiography (ICA) and subsequent revascularisation is recommended. The guidelines also recommend CTCA as an alternative to functional testing.5 In the UK, exercise tolerance testing (ETT) is the most common first-line test in patients presenting
with troponin-negative acute chest pain. The high proportion of false-positive and inconclusive results often mandates second-line tests. We evaluated the diagnostic accuracy and cost implications of CTCA as a first-line investigation in a cohort of patients admitted to our district general hospital (DGH) emergency medical service, with troponin-negative acute onset chest pain, and low-to-intermediate risk as defined by Thrombolysis in Myocardial Infarction (TIMI) score. We compared them with a similar cohort of patients who were investigated with ETT prior to the introduction of CTCA in our DGH. We hypothesised that CTCA would outperform ETT because of its excellent negative-predictive value.

Fifty-four consecutive patients (mean age 50.7 ± 13.1 years; 74% male) presenting with chest pain to our emergency medical service were referred for ETT as a first-line investigation following a clinical assessment, a negative troponin and a low-to-intermediate TIMI score, as per standard of care at the time. Patients were assessed by acute medical teams, led by consultant general physicians.

Second-line investigations were decided based on the clinical judgement of the admitting consultant general physician. Patients with a positive ETT are usually referred for ICA. Patients with inconclusive ETT, or in whom target heart rate was not achieved, are usually considered for an imaging functional test (stress echocardiography or nuclear myocardial perfusion stress test) or ICA.

After introduction of CTCA in our hospital, a further 55 consecutive patients (mean age 50.1 ± 8.6 years; 65.5% male) were referred for CTCA as a first-line investigation. Patients presenting with acute chest pain, who were admitted via the emergency department, were assessed by acute medical teams led by consultant general physicians and referred for CTCA based on a low-to-intermediate likelihood of having CAD based on clinical judgement and TIMI score.

Patients were given oral beta blockers by the referring clinician (atenolol 50 mg) and/or were given intravenous beta blockers (intravenous metoprolol 5–30 mg) with the aim of achieving a heart rate of <60 bpm. All patients received two 400 µg doses of sublingual glyceryl trinitrate. For the contrast part of the scan, 100 ml of ivoersol (Optiray™ 350 mg/ml, Covidien UK), at a flow rate of 5 ml/s followed by 100 ml of saline solution, were injected into an antecubital vein via an 18-gauge cannula. Bolus tracking was used with a region of interest placed into the ascending aorta.

All CTCAs were performed with a 64-slice LightSpeed VCT XTe™ scanner (GE Healthcare) and prospective gating. We used the commercially available protocol (SnapShot Pulse, GE Healthcare) and the following scanning parameters: slice acquisition 64 x 0.625 mm, smallest X-ray window, Z-coverage value of 20 mm with an increment of 20 mm, and gantry rotation time of 350 ms. The patient’s size was judged visually for both the adapted tube voltage and effective tube current. Padding with 65% to 85% phases of the RR-cycle was used for the first 20 patients, after which only the 75% phase or the RR-cycle was used. The effective radiation dose of CTCA was calculated as the product of the dose–length product (DLP) times a conversion factor coefficient for the chest (K=0.014 mSv/mGy cm).

The total cost of investigation to reach diagnosis was calculated for each patient based on the UK Payment by Results tariffs. As there is currently no agreed UK national tariff for CTCA, we calculated a cost of £150 based on similar computed tomography (CT) examinations, specifically CT pulmonary angiography. The tariff for ETT was £117.

The main results are summarised in figure 1.

A positive ETT led to ICA in 66.7% of patients or further functional testing in 11.1% of patients, while the remaining 22.2% were medically managed for CAD. Of the six patients (66.7%) with a positive ETT who were referred for ICA, two (33%) had severe coronary stenoses requiring PCI.

An inconclusive ETT led to ICA in 33.3% of patients, while the remaining 66.6% did not undergo any further investigations. Of the three patients (33%) with an inconclusive ETT who were referred for ICA, two (66.7%) had severe stenoses requiring PCI.

Fifty-five patients with TIMI score ≤4 underwent CTCA. 50 had a low TIMI score (≤2) and five patients had an intermediate TIMI score (3–4). Thirty-two (58%) received a clear diagnosis of normal coronary arteries, were reassured and discharged. Eleven (20.0%) were found to have mild CAD and secondary prevention was recommended. These two groups did not require any further tests. Ten (18%) patients had significant stenosis (lumen diameter reduction ≥50%). Two patients had inconclusive studies, one because of inadequately controlled heart rate and the other because of a run of ectopics during the acquisition.

Seven patients had severe stenoses on CTCA and were referred for ICA with a view to proceeding to PCI. Of these, five (71%) had obstructive CAD disease that warranted revascularisation. The remaining two patients were deemed to have moderate stenoses only on ICA, and did not require revascularisation, so they were managed medically.

Three patients were found to have moderate stenosis on CTCA. Of these, two were referred for functional tests and both had no inducible ischaemia. The third patient was concurrently diagnosed with a pulmonary embolus from the CTCA, and he was treated with anticoagulants. The mean radiation dose for the CTCA cohort was 3.1 ± 0.9 mSv per patient.

Looking at costs, CTCA had a higher cost compared with ETT. The overall cost per patient was £375 with CTCA vs. £309 with ETT, but this was not statistically significant (p=0.28).

A recent study by Maffei et al. compared ETT with CTCA, against ICA as the gold standard, in a cohort of patients with chest pain and low-to-intermediate risk score (all patients underwent all three tests). The sensitivity, specificity, positive-predictive value and negative-predictive values for ETT were 46.2%, 16.6%, 8.7% and 64.1%, respectively, compared with CTCA which were 100%, 98.7%, 92.9% and 100%, respectively. The prevalence of significant CAD (defined as >50% stenoses) was 14.7%, which is similar to our data. In Maffei et al., however, the ETT did not perform well, with 50% of the patients found to have a positive ETT, 22% an equivocal ETT and only 28% a clear negative ETT.6

In our study, however, ETT performed better than expected compared with other published data, with two thirds of patients having a clear negative test. Of these, 16.7% still went on to have a further test. Interestingly, only 16.7% of our ETT cohort had an inconclusive test, with only a third of these patients going on to have further investigations in the form of ICA. Since these patients do need further investigation, usually in the form of imaging functional tests or ICA, this will increase the overall cost of patients who have ETT as a first test.

Of the patients with a positive ETT who had an ICA, only 33% were found to have significant coronary stenoses demonstrating the known low sensitivity of ETT. The numbers in our ETT cohort are small but the sensitivity in the similar study by Maffei et al. was similarly low at 46%.6 This means that a large number of patients with false-positive ETT would have to undergo an ICA with considerable cost and a degree of risk (0.1% mortality). Recent data from a large US registry shows that 39% of all patients undergoing ICA have normal coronary arteries.7 NICE recommended, in their recent guidance, that the ETT is no longer used as a diagnostic test for CAD.1

For the CTCA cohort, 71% of the patients referred for ICA had their severe stenoses confirmed and were revascularised, which is significantly superior to ETT. Otherwise CTCA ruled out significant CAD in 78% of the cohort, giving clear diagnoses of either normal coronaries or mild CAD. In our DGH, the CTCA service is cardiologist led and the reporting is done immediately after acquisition. The cardiologist is able to speak to the patient immediately after reporting to reassure and discharge, recommend secondary prevention as per the recent evidence from the CONFIRM registry,4 or plan further investigations. Using this CTCA strategy, the vast majority of patients were immediately discharged from hospital, shortening costly hospital stay.
Our findings are in keeping with three recent US clinical trials, which demonstrated that CTCA can lead to early discharge from the emergency room, substantially reducing patient length of stay, reducing overall cost, compared with standard of care and single-photon emission CT (SPECT). CTCA also had a higher rate of detection of CAD.8-10

CTCA is a safe and non-invasive diagnostic tool. Prospective gating, which is available on all modern 64-slice CT scanners, reduces the radiation dose to 2–3 mSv. This is a fraction of the radiation dose of SPECT perfusion. Used in patients with a low-to-moderate likelihood of having CAD, CTCA has been shown to be efficient and clinically effective to categorically exclude the presence of CAD in the majority of these patients. A UK multi-centre clinical trial is needed to evaluate this relatively new and important technology in a UK context. In the interim, NICE are likely to look favourably on CTCA following the recent US clinical trials.