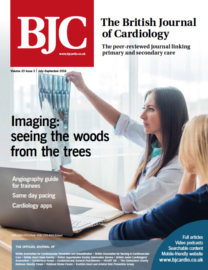 The National Institute for Health and Care Excellence (NICE) has made an important change to Clinical Guideline 64 (CG64)1 adding the word ‘routinely’ to Recommendation 1.1.3: “Antibiotic prophylaxis against infective endocarditis is not recommended routinely for people undergoing dental procedures”. In a letter about the change,2 Sir Andrew Dillon, CEO of NICE, confirmed that “… in individual cases, antibiotic prophylaxis may be appropriate”.

Compared with other diseases, cardiovascular diseases (CVD) are responsible for the greatest burden of disease both globally1 and in the UK.2 Drugs for CVD and its risk factors have always been represented in the list of international blockbuster drugs. Important research innovations, such as ‘learning health systems’, ‘precision medicine’ and electronic health record (EHR)-based trials, have been led by professionals in the field of cardiology. Cardiovascular scientists from the UK have a long and strong history of research contributions with international impact. Training in cardiology is critical, not only in preparing and mentoring the clinical and academic cardiologists of the future, but also in shaping how the specialty is perceived from inside and outside. Global health and data science are overarching themes that offer new lenses through which to view CVD and cardiology. However, cardiology training in the UK barely pays lip service to either of these issues, when their implications have never been greater or more acute on our specialty.

Incidental findings on imaging: seeing the wood from the trees

The coronary artery calcium (CAC) score is widely believed to be an important tool in determining the risk of developing heart disease. The measurement of this score has traditionally been based on using electrocardiography triggered computed tomography (CT). This confers an advantage over non-gated CT scanning by acquiring images during diastole, which reduces motion artefact and avoids missing areas of coronary artery calcification. Radiologists are, therefore, cautious when reporting CAC on non-gated CT scans due to concerns that it may not be accurate. This means that there is currently no obligation, from a radiology perspective, to report on the degree of CAC on non-gated CT scans. While this has been acceptable for a long time, emerging evidence may force us to change our practise.

The ability to perform invasive diagnostic coronary angiography is a core requirement for cardiologists and fellows in training programmes. However, although key to their independence is the ability to obtain high-quality images that allow visualisation of the entire coronary vasculature, there exists no formal systematic method or teaching aid. This article provides an overview of the radiological equipment used in the catheter laboratory, details the naming of the different angiographic projections, and gives key tips and tricks to improve image quality. In addition, the coronary vasculature is broken down into segments, with descriptions provided of the essential views required to image each one. Using this approach, it aims to provide an essential aid to trainees and other healthcare professionals at the start of their careers.

There is variable adoption in same-day discharge for pacing procedures across Europe. We compared length of hospital stay and complication rates in two cohorts, using a same-day and next-day discharge protocol. Case notes were reviewed for 229 consecutive patients attending our tertiary centre for device implantation to establish the rate of hospital readmission and complications. These comprised 106 patients in the next-day discharge cohort, and 123 from the same-day cohort. All pacing procedures, including cardiac resynchronisation therapy (CRT) and implantable cardioverter-defibrillators (ICDs), were included.

No significant differences were observed between cohorts in age, gender, device indication, device type, procedure urgency or venous access route. Median length of stay post-implant significantly reduced from 1.2 days in the next-day cohort (25th–75th centile 1.06–3.24) to 0.99 days in the same day cohort (0.3–1.3) and from 1.08 days (0.94–1.2) to 0.36 (0.27–0.97), respectively, for the subgroup of elective patients (n=95). Death, complication, and readmission rates were similar between the two cohorts. Morning procedures were associated with shorter hospitalisation. No same-day cohort CRT recipients (n=28) suffered complications.

In conclusion, same-day discharge for pacing (including CRT and ICDs) results in decreased length of stay without increasing complications.

A 22-year-old man was admitted to a general district hospital with a three-day history of epigastric pain and shoulder discomfort. He reported shortness of breath on exertion, but denied any chest pain or flu-like symptoms. He had no past medical history of note. Vital signs assessment confirmed low blood pressure of 90 mmHg systolic, and tachycardia of 130 beats per minute. Physical examination of the abdomen revealed mild epigastric tenderness. A computerised tomography (CT) scan for suspected cholecystitis showed a normal gall bladder, but revealed a large rim of pericardial effusion measuring 2.8 cm. He was then urgently transferred to a tertiary cardiac centre for assessment and consideration of pericardiocentesis.

In 2012, the British Association for Cardiovascular Prevention and Rehabilitation (BACPR) published guidance on the standards and core components of cardiac rehabilitation (CR). However, annual reports from the UK National Audit of Cardiac Rehabilitation (NACR) have shown that, while there are examples of excellent practice in the UK, many CR programmes do not meet the BACPR standards. It is difficult for service managers, patients and commissioners to assess how a particular CR programme meets minimum standards of service delivery. These findings led the BACPR and NACR to work together to develop a UK National Certification Programme for CR that would be mainly based on assessment of quality-assured patient-level NACR data. The development of the certification process was built on surveys and interviews with CR service providers, patients and commissioners. Minimum standards for certification were developed by an expert group. The resulting process for certification of meeting minimum standards of CR service was then successfully pilot-tested with 16 CR programmes, of which 13 programmes have since met minimum certification standards. CR programmes that submit data to the NACR can now apply for assessment under the BACPR/NACR National Certification Programme.

Refractory angina represents an important clinical problem. Spinal cord stimulation (SCS) for refractory angina has been used for over two decades to improve pain and, thus, quality of life. This case series reports the clinical efficacy and safety profile of SCS.

We included patients who had a SCS device implanted between 2001 and 2015 following a rigorous selection process. Patients were prospectively followed. We performed a descriptive analysis and used paired t-test to evaluate the difference in Canadian Cardiovascular Society angina (CCS) class before and after SCS implant.

Of the 100 patients included, 89% were male, the mean age was 65.1 years and mean follow-up time was 53.6 months. The CCS class after SCS implant was statistically improved from before (p<0.05) and 88% of patients who gave feedback were very satisfied. Thirty-two patients died, 58% of those who had a documented cause of death, died from a non-cardiac cause.

This study shows the outcome of 14 years’ experience of SCS implantation. The anginal symptoms had a statistically significant improvement and the satisfaction rate was higher than 90%. The complication rate is within the range reported in the literature. SCS seems to be an effective and safe treatment option for refractory angina.

Portable device for pacemaker and ICD...

Correspondence: Sacubitril/valsartan: where should it sit in the heart failure pathway?

In this report we review two major American meetings: the 36th Annual Meeting and Scientific Sessions of the International Society for Heart and Lung...

Junior doctor Jonathan Bennett reviews cardiovascular apps and makes recommendations to fellow juniors of those he found most...