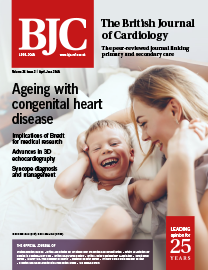 Congenital heart disease (CHD) is the most common congenital anomaly, with an estimated prevalence of eight per 1,000 births.1 However, reliable data on long-term survival for this heterogeneous group of patients are still lacking. Previous population-based studies from the US reported age-standardised mortality rates secondary to CHD of 1.2 per 100,000.2 Mortality was highest during infancy (48.1% of all deaths occurred under the age of one year), however, the majority of the remaining deaths occurred outside of childhood, following transition to adult care. Yet, while it is accepted that individuals with CHD may have a higher mortality compared with the general population, the wide spectrum of disease means interpretation of population-based mortality rates for individual lesions is difficult. Additionally, a significant number of studies report only on short-term follow-up, meaning that long-term outcomes are unknown. A previous systematic review reported pooled survival estimates for common CHD lesions, however, it only included studies from hospital-based cohorts with survival estimates calculated from the time of surgical repair.3 It, therefore, does not account for those patients who do not need surgical intervention and may not be representative of all patients with CHD. Knowing the expected mortality rates for CHD is not only important for family counselling, but also in service planning.

Implications of Brexit for medical research

In September last year, the Scottish Cardiac Society (SCS) celebrated its 25th anniversary with a two-day symposium held in Crieff – the same venue where the inaugural meeting took place in 1992.

The past decade has seen the emergence of several new classes of drugs for the treatment of type 2 diabetes mellitus (T2DM). Despite the increasing use of these agents, metformin and sulfonylureas remain the most commonly prescribed glucose-lowering drugs in people with T2DM. This reflects the National Institute for Health and Care Excellence (NICE) guideline from 2015 and the Scottish Intercollegiate Guidelines Network (SIGN) guideline from 2010, which recommended metformin as first-line treatment and sulfonylureas as the ‘usual’ second-line treatment for patients with T2DM. SIGN has recently provided an updated guideline on the pharmacological management of glycaemic control in people with T2DM. For the first time in UK guidelines, this recommends that in individuals with diabetes and cardiovascular disease, sodium-glucose co-transporter 2 (SGLT2) inhibitors and glucagon-like peptide-1 (GLP-1) receptor agonists with proven cardiovascular benefit (currently empagliflozin, canagliflozin and liraglutide) should be considered. It is anticipated that implementation of these new guidelines will lead to increased prescribing of these drugs in people with diabetes and cardiac disease, with reductions in prescribing of dipeptidyl peptidase-4 (DPP-4) inhibitors and other drugs in the GLP-1 receptor agonist class, where cardiovascular benefits have not been clearly demonstrated.

‘Normal’ blood pressure: too good to be true? Case series on postural syncope and the ‘white-coat’ effect

Ambulatory blood pressure monitoring (ABPM) can confirm diagnosis in essential hypertension (HTN) and mitigate the ‘white-coat’ effect, preventing erroneous antihypertensive therapy. We aimed to collect a case series of over-treated hypertension in the context of ‘white-coat’ effect, resulting in pre-syncopal or syncopal episodes. We collected data retrospectively from patients presenting to syncope clinic between January 2016 and March 2017. ABPM was used at baseline and repeated at three months, following withdrawal of one or more antihypertensive agents.

In conclusion, some patients exhibit pre-syncope or syncope due to over/erroneous HTN treatment resulting in orthostatic hypotension. Our findings suggest that reducing antihypertensive medications may resolve symptoms, without rendering them hypertensive.

Advancements in computer and transducer technologies over the past two decades have allowed the development of three-dimensional (3D) echocardiography (3DE), which offers significant additional clinical information to traditional two-dimensional (2D) echocardiography (2DE). However, the majority of departmental studies today remain 2D, and adoption of 3DE as a complementary tool into mainstream clinical practice has not been without its difficulties. Although cardiologists have a range of alternative imaging modalities at their disposal to investigate cardiovascular structure and function, given the pace of technological innovation and improvements in data analysis, the field of 3DE is one of great expectation and is likely to be of increasing clinical importance. In this review, we discuss the role of 3DE, its advantages and limitations, and how novel technology will help workflow and expand its routine use.

Refractory angina (RA) is characterised by persistent anginal symptoms despite optimal medical therapy and revascularisation. Enhanced external counterpulsation (EECP) is a technique that has shown promise in the treatment of this condition but is poorly utilised in the UK. The aim of this study is to assess the effect of EECP on anginal symptoms in patients with RA from a UK centre.

Our study demonstrates use of EECP to be associated with significant improvements in exercise capacity and anginal symptom burden.

A study in the diagnosis and management of syncope: a retrospective review

A study of 500 patients was conducted to ascertain how syncope is managed at the Ipswich Hospital NHS Trust. This was based on the variation in approach across the country despite the guidance from the European Society of Cardiology (ESC), National Institute for Health and Care Excellence (NICE) and the Heart Rhythm Society. Similar studies in the UK have indicated a number of inconsistencies in both the management and diagnosis of patients with suspected syncope.

We discuss the role of a syncope pathway, the need for a separate syncope clinic and for syncope experts.

A retrospective analysis of 50 inpatients admitted with syncope was undertaken to evaluate the safety and cost-effectiveness of a novel outpatient syncope clinic recently introduced within an emergency ambulatory care unit at a northwest London hospital together with review of echocardiographic parameters in syncope. Outcome measures included length of inpatient admission, frequency of cardiology review, 30-day readmission and 90-day mortality rates. The same variables were assessed prospectively in 50 inpatients referred to the syncope assessment unit (SAU). All 100 patients were deemed low risk, as defined by the San Francisco syncope rule. Patients under the age of 18 years and those investigated for conditions other than syncope were excluded. Echocardiographic parameters such as E/A ratio, left atrial (LA) dimension, left ventricular (LV) ejection fraction and E/E′ ratio were statistically analysed for their association with episodes of syncope.

The standard-care group remained in hospital for a median four days at a cost of €582 (£512). Waiting time for an SAU appointment was a median two days. Inpatient waiting time for 24-hour Holter and transthoracic echocardiography (TTE) investigations were significantly longer for the standard-care group (p<0.05). There was no significant difference in the rates of cardiology review, diagnostic yield, hospital readmission and mortality between the two groups. The SAU will save a projected annual cost of €108,371 (£95,232) on inpatient bed days. The fractional cost of clinical assessment on the SAU is €35 (£31) per patient. Among the echocardiographic parameters analysed, increased E/E′ ratio was associated with syncope (p=0.001).

In conclusion, the introduction of a novel low-risk SAU promotes early discharge from hospital with prompt outpatient medical review and shorter inpatient waiting times for diagnostic investigations. Our data suggest this is both cost-effective and safe. E/E′ echo parameter was observed as a significant parameter in low-risk syncope.