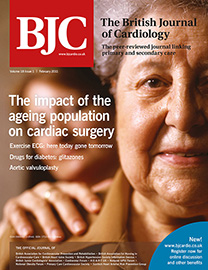 Impact of the ageing population on cardiac surgery in the UK

In their article, Ngaage and colleagues (see pages 28–32) discuss the influence of an ageing population on care and clinical resource utilisation in cardiac surgery in the UK. They reviewed approximately 7,000 patients who underwent coronary artery bypass graft (CABG) surgery and valvular heart surgery over a 10-year period. Altogether, 38% of their patients were older than 70 years. They showed that older patients had a higher need for peri-operative interventions and requirements, thereby incurring extra resources and expenses. Advancing age in the Western world has led to a significant increase in the number of elderly patients requiring cardiovascular care and cardiac surgery.1 In deciding which patients need surgery, the benefits of both traditional and minimally invasive cardiac operations have to be balanced against the risks of these procedures, especially in the elderly population. The main risks of cardiac surgery affecting the elderly are transient ischaemic attack, stroke and cognitive decline, which can be as high as 13%, and renal failure, with 7% requiring renal replacement therapy.2 Furthermore, mobilisation, rehabilitation and returning home after surgery are significant considerations when treating the elderly. It would be a failure of cardiac surgery if the patient could not be rehabilitated and be able to assume a good lifestyle following their operation.

In March 2010 the National Institute of Health and Clinical Excellence (NICE) published guidance on the management of patients with chest pain of recent onset.1 The guidance is based upon contemporary literature and provides an evidence-based approach to the diagnosis of patients with acute and stable chest pain.

Thiazolidinediones (glitazones) are a relatively new addition to the type 2 diabetes drug armoury, but they have caused considerable controversy since they were introduced into the routine management of patients with type 2 diabetes. Until recently there were two thiazolidinediones licensed for use in the treatment of type 2 diabetes: rosiglitazone and pioglitazone, but the European Medicines Agency (EMEA) on the 23rd September 2010 removed rosiglitazone’s marketing authorisation across Europe because of concerns about cardiovascular safety. There is no evidence to show a similar cardiovascular safety concern for pioglitazone, apart from increased fluid retention and reported heart failure. Pioglitazone may still have a therapeutic role in the management of selected patients.

The increasing population of elderly patients undergoing surgery has implications for care and resource utilisation, and the potential to meet operating targets. We prospectively reviewed collected data for 6,971 patients who underwent coronary bypass and/or heart valve operation from March 1998 through January 2007. Resource utilisation between young (<70 years) and elderly (≥70 years) patients was compared.

Survey of cardiac rehabilitation across the English Cardiac Networks 2007–2009

Cardiac Networks always promised to be effective health communities across which sharing good practice and ultimately redesigning ideal care pathways for patients including Cardiac Rehabilitation (CR) could be made. The Black Country Cardiovascular Network in collaboration with the NHS Improvement programme conducted this observational study aiming at assessing and encouraging CR development across the English Cardiac Networks.

Aortic valvuloplasty – is a revival merited?

Balloon aortic valvuloplasty (BAV), first developed last century for the management of symptomatic aortic stenosis, was met with great enthusiasm due to its new and minimally invasive technique, but it has now largely been abandoned due to suboptimal results and a high restenosis rate. However, with the development of new techniques and the arrival of transcatheter aortic valve implantation (TAVI), BAV’s use is starting to increase. In this article we put forward the case for a revival in BAV by exploring the traditional uses and safety of BAV as a procedure as well as a novel role as a bridge to TAVI.

Cardiovascular disease is a major cause of death in patients with type 2 diabetes mellitus (T2DM) and multiple lipid abnormalities are common. Niacin effectively treats diabetic dyslipidaemia and reduces cardiovascular events in high-risk patients. We evaluated the lipid-altering efficacy and safety (especially, glycaemic control) of extended-release niacin/laropiprant (ERN/LRPT; a tablet containing 1 g ERN and 20 mg LRPT) in patients with T2DM. In this multi-centre, double-blind, placebo-controlled, 36-week study, patients (n=796) were randomised 4:3 to ERN/LRPT or placebo. After four weeks at 1 g/day, ERN/LRPT was doubled to 2 g/day (two tablets) for the remainder of the study. The vast majority of randomised patients (~90%) were dyslipidaemic based on medical history or baseline lipid levels; approximately 80% were taking statins and 99% were on an antihyperglycaemic regimen. At week 12, ERN/LRPT produced significant (p≤0.001 for all) percentage changes from baseline in low-density lipoprotein cholesterol (LDL-C) (–17.9%), high-density lipoprotein cholesterol (HDL-C) (23.2%), LDL-C:HDL-C (–32.0%), triglycerides (–23.1%), apolipoprotein (Apo) B (–17.1%), Apo A-I (8.2%) and total cholesterol (TC):HDL-C (–22.9%) versus placebo. The clinical and laboratory adverse events that occurred more frequently in the ERN/LRPT group versus the placebo group were pruritus, rash, flushing, gastrointestinal upset and elevations in alanine aminotransferase, aspartate aminotransferase, fasting plasma glucose (FPG) and glycosylated haemoglobin (HbA1c). From baseline to week 36, median FPG and HbA1c increased with ERN/LRPT from 7.31 to 7.88 mmol/L and 6.9 to 7.3%, respectively, consistent with known niacin effects. More patients in the ERN/LRPT group required intensified antihyperglycaemic therapy (17.6% vs. 8.2%; p≤0.001). In this population of patients with T2DM, ERN/LRPT produced significant, durable improvements in lipids/lipoproteins and had a safety profile consistent with ERN/LRPT and ERN alone in other populations.

Contemporary coronary imaging from patient to plaque: part 5 a glimpse of the future

In this series of articles looking at contemporary ways to image atherosclerosis, we have covered the main techniques used in the UK as diagnostic tools and research modalities. For this final article, I have chosen to concentrate on new technologies that show promise for the future.

Patients who start antihypertensive treatment with two drugs do better than those initially given just one, according to the ACCELERATE...

The UK Stroke Association is in the process of planning an awareness campaign around atrial fibrillation (AF) and its link to stroke. The campaign...

Congratulations to Barbara Conway, Cardiovascular Clinical Team Leader at NHS Darlington, who has won the British Journal of Cardiology Prize for Innovation in Cardiac...

Ticagrelor (Brilique®, Astra Zeneca) has received authorisation from the European Medicines Agency for use in combination with aspirin in the prevention of atherothrombotic events...

Use of the angiotensin receptor blocker (ARB) candesartan was associated with a lower mortality than losartan in a Swedish registry of heart failure...

Statins and CV events in patients with abnormal liver tests

According to a recent study, led by Vasilis Athyros from the Hippokration University Hospital in Thessaloniki, Greece, and Dimitri Mikhailidis from University College London,...

News from the world of cardiology....

The 2010 Scientific Meeting of the Scottish Heart and Arterial Prevention Group (SHARP) took place in November 2010 and addressed, in detail, the interface...

Welcome to the third of the series of news and reviews from the British Cardiovascular Society (BCS). In this article, Dr Jim Hall, Vice-President for...