The increasing population of elderly patients undergoing surgery has implications for care and resource utilisation, and the potential to meet operating targets. We prospectively reviewed collected data for 6,971 patients who underwent coronary bypass and/or heart valve operation from March 1998 through January 2007. Resource utilisation between young (<70 years) and elderly (≥70 years) patients was compared. 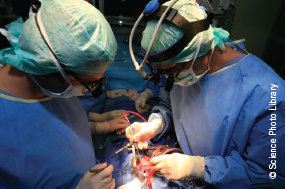 The average age and risk profile of patients undergoing cardiac surgery are steadily increasing and present new sets of challenges to surgical care. Whereas the clinical implications of this demographic change continue to be the focus of ongoing investigation,1,2 the impact on care and clinical resource utilisation has not been clearly defined, even though studies have shown higher costs for octogenarians.3,4

Cost of care is a major issue in healthcare delivery, and cost-effectiveness in universal healthcare schemes like the National Health Service (NHS) is critical to sustainability.5,6 The core founding principles of the NHS “that it meet the needs of everyone, that it be free at the point of delivery, and that it be based on clinical need, not ability to pay”, have been threatened during its 60-year existence. The continuing demand for the complete cover of costly therapies by the NHS has generated discussions about co-pay7,8 and, not surprisingly, an open debate about rationing of services.

Unlike cost and clinical outcomes, care and clinical resource utilisation, including services of skilled and unskilled staff, operating theatre slots, intensive/high-dependency and ward beds, mechanical devices, drugs and disposables, are difficult to quantify. Clinical productivity of a cardiac unit, in terms of number of operations safely performed, is affected by available clinical resources. Changing patient characteristics can affect care and clinical resource utilisation and, potentially, clinical productivity and the ability to meet operating targets. We have already reported the contrasting clinical characteristics and outcomes for elderly and young patients undergoing cardiac surgery.9 In the present study, we compare the utilisation of quantifiable clinical resources between young and elderly patients who underwent coronary artery bypass grafting (CABG) and/or heart valve repair or replacement over a 10-year period.

After study approval was obtained from the Medical and Ethics committee of our institution, prospectively collected and stored clinical data were retrieved from our departmental database for all patients who underwent primary CABG and/or aortic or mitral valve replacement/repair at our university teaching hospital between March 1998 and January 2007. On the basis of age, patients were classified as young if less than 70 years old or elderly if aged 70 years or more. The clinical profiles, operative details and surgical outcomes of the two groups were compared. The distribution of factors known to increase care needs and clinical resource utilisation were also compared between elderly and young patients. We defined ‘progression through care’ to include: duration of mechanical ventilation, intensive care treatment, high-dependency and overall hospital stay, and frequency of intensive care unit (ICU) re-admission and discharge to supervised convalescence at another healthcare facility. ‘Progression through care’ was considered delayed for patients who had: ICU stays longer than 24 hours, hospitalisation more than 12 days (the 75th percentile for the longest hospital stay after mitral valve replacement from 2003 national data10), ICU re-admission and discharge to another healthcare facility.

In the current NHS structure, hospitals get a standard reimbursement for specific operations; the package covers a liberal length of hospitalisation referred to as ‘trim days’ beyond which hospital stay attracts extra charge. The cost of patients’ stay in hospital is mainly based on the Healthcare Resource Group that is derived electronically by each patient administration system and generated using the diagnosis codes and operation/procedure codes input. Also included in the algorithm is the age of the patient and the type of admission, elective or non-elective. For each Healthcare Resource Group a cost is attached by the Department of Health, and this cost is then retrieved back from the relevant Primary Care Trust. Additional costs can also be incurred if the patient stays longer than the average for that Healthcare Resource Group and for any ICU bed days. This system of costing precludes a reliable retrospective calculation of the direct cost of care and, hence, was not investigated in this study.

Statistical analysis was performed using the Statistical Package for the Social Sciences (SPSS) version 15.0 for windows (SPSS Inc. 2005, Chicago, IL). Categorical variables are reported as percentages and compared between the groups with Pearson’s chi-square test. Continuous variables are reported as median with 25th and 75th percentiles as interquartile range (IQR), and compared between groups using Mann–Whitney U test. A two-sided p<0.05 was considered significant.

There were major differences in the clinical profile, operative variables and surgical outcomes between elderly and young cardiac patients, and this is highlighted in tables 1 and 2. A significantly greater proportion of the elderly presented for surgery with severe symptoms, left ventricular systolic dysfunction, heart failure, co-morbidities, and underwent complex (combined CABG and valve) and non-elective operations, compared with young patients. The predicted operative risk and, therefore, the observed operative mortality and morbidity were higher in the elderly. Cardiovascular, pulmonary, renal, cerebrovascular and infective complications occurred more frequently in the elderly. Elderly patients had longer periods of mechanical ventilation, intensive treatment, and hospitalisation. They were also more frequently re-admitted to intensive/high-dependency care units, and discharged to supervised convalescence at another healthcare facility, than young patients.

Disproportionately higher postoperative complication rates led to greater use of additional treatment, supportive therapy and extended management for elderly patients. A consistently greater proportion of elderly patients required extra medications, blood product transfusions, further interventions and use of cardiovascular devices, as displayed in table 3. Compared with young patients, the requirement by the elderly for extra medications like inotropes, anti-arrhythmics and antibiotics was in excess of 32%, for transfusion of blood products 20%, for further interventions such as resternotomy, sternal re-wiring, gastrointestinal endoscopy, laparotomy and renal replacement therapy 6%, and 2% for cardiovascular device usage including intra-aortic balloon pump, ventricular assist device and permanent pacemaker.

There were remarkable differences in ‘progression through surgical care’ between elderly and young patients. The duration of mechanical ventilation, intensive and high-dependency care, and hospital stay were consistently longer for elderly patients. The elderly were also more often re-admitted to the ICU and discharged from hospital to other healthcare facilities for supervised convalescence. ‘Progression through care’ was considerably delayed in elderly patients in comparison with young patients by ratios of 1.3:1 for ICU stay, 2.5:1 for re-admission to ICU, 2:1 for prolonged hospitalisation and 2.4:1 for discharge to supervised convalescence.

Cumulatively, care and clinical resource utilisation for the elderly was in excess of young patients by 91%, aside from imponderables such as repeat investigations, ancillary and supportive therapies like physiotherapy, dietary management and miscellaneous care, especially relating to postoperative complications like neurological dysfunction (confusion, seizures and neurological deficit), which was more common among the elderly (6% vs. 3%, p<0.0001).

All the factors that have been linked with escalated hospital costs and resource utilisation, such as high predicted operative risk,11 non-elective operation,12 blood transfusion,13 invasive monitoring,14 prolonged ventilation,15 long periods of intensive treatment and duration of hospitalisation,16 postoperative atrial fibrillation,17 and hospital-acquired infections,18,19 were predominant in the elderly. The present study shows that care and clinical resource utilisation for elderly patients after cardiac surgery far exceeded those for young patients by up to 91%, excluding a vast amount of associated imponderables. By increasing postoperative morbidity, prolonged hospital stays and extended care,20 age is a major contributor to clinical care and resource utilisation. The propensity for the elderly to undergo higher-risk procedures like combined CABG and valve operations, as our series and other studies have shown,21 adds to this risk.

A greater demand is placed on relatively fixed clinical resources like theatre slots, ICU, high-dependency and ward beds, and healthcare staff by a burgeoning population of the elderly, and this can potentially affect clinical productivity (the number of cardiac operations performed safely). This is capable of impacting on the ability to meet operating targets, hence, different cardiac units often adopt ad hoc strategies to maintain a steady patient flow. Studies have shown that coordinated organisational changes in peri-operative management are sometimes necessary to maintain clinical productivity in the face of increased demand on clinical resources.16,22,23 Such changes involve a concerted approach by a multi-disciplinary team of clinicians and non-clinicians with administrative responsibility.

The clinical and non-clinical implications of this study deserve careful interpretation. Elderly patients are generally high operative risk for several reasons, and consequently the observed operative morbidity and mortality are comparatively higher than for young patients. However, like for young patients, the clinical outcome of surgery for the elderly is within expected and acceptable range for operative mortality. Greater commitment of clinical resource and care are required to maintain, and possibly improve, this outcome for the elderly. With a growing population of elderly patients undergoing even more complex surgery, the ability of surgery units to continue to meet surgical targets would depend on making adequate provisions to accommodate the increased utilisation of care and clinical resources. Effective mechanisms to deal with the challenges of the changing demographics of the surgical patient should be an important consideration in planning, negotiating and implementing surgical targets.

The retrospective nature of the data limits the conclusions that can be drawn from this study. As data were not collected specifically for the study, some variables of interest were not available for analysis. For example, the intensity of medical and nursing care, involvement of multi-disciplinary team, frequency and type of investigations, and the number of operations delayed or cancelled because of bed shortages or lack of staff coverage, were not accounted for. The cumulative excess rate for clinical care and resource utilisation reported for elderly patients in this study, therefore, is at best an underestimation. However, this study highlights the emerging challenges surgical units face due to changing patient characteristics.

In conclusion, an optimal strategy for meeting the emerging challenges of surgery in the current era should consider the additional burden an ageing population places on clinical care and resources. A growing elderly population of surgical patients significantly increases clinical care and resource utilisation such that a coordinated clinical and organisational approach is required to meet set targets within the context of an overall strategy that supports improvement and constant progress in operative outcome.

See also the editorial by Professor Jahangiri on pages 5–6 of this issue.

COVID-19 and care of the elderly

Is six weeks too long for the first outpatient review after cardiac surgery? FORCAST6