Mitral valve stenosis (MS) is attributed mainly to rheumatic fever and may remain unrecognised for several years. Early diagnosis of this lesion is important in order to implement the necessary management when either severe or complicated by atrial fibrillation. However, its incidence in a multi-ethnic community has not yet been recognised. We retrospectively studied 2,099 consecutive subjects for the presence of MS. All the patients were newly referred by general practitioners to a community general cardiology clinic and hypertension clinic in a district of London because of different cardiac symptoms, significant cardiac history or because of uncontrolled hypertension. All the patients underwent echocardiography routinely. Classical clinical signs of MS were present in four patients. Echocardiography showed MS in eight patients, in four of whom the MS was mild, moderate in three and severe in one patient. None of the patients had symptoms related to the MS and all were in sinus rhythm both clinically and during Holter monitoring. Only one patient was Caucasian, two were of Caribbean origin and five were of Indo-Asian origin. Subsequent cardiac catheterisation and mitral valve replacement were successfully carried out in two patients. It is concluded that rheumatic MS is still prevalent in the UK population and is more common in subjects of Indo-Asian origin than either Caucasian or Afro-Caribbean subjects. MS was not recognised by the general practitioners: its diagnosis was only made possible by echocardiography. 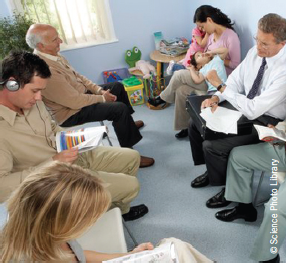 Rheumatic fever is the leading cause of acquired heart disease in children and young adults in the world.1,2 The relationship between rheumatic fever and streptococcal infection has been well documented.3,4 Stenosis of the mitral valve, either alone or in combination with other valvular diseases, is caused almost exclusively by rheumatic fever.3 Involvement of the mitral valve represents the most common of all sites affected by the rheumatic process.5 However, as many as half of the population with mitral stenosis give no history of rheumatic fever.5 On the other hand, the majority of patients with mitral stenosis remain asymptomatic for a significant time. Although in some studies a lapse of two to eight years has been reported,5 it has been demonstrated in one study that nearly two-thirds of children with a history of acute rheumatic fever did not show the disease after 10 years of follow-up.6 In another study, an average latent period of 19 years before the disease becomes clinical was reported with an average mean age for the attack of carditis being 12 years and the age of the appearance of symptoms 31 years.7 Five years after onset of rheumatic fever, there is less ability to diagnose mitral valve disease when compared with the period during the rheumatic fever episode.8

Doppler ultrasound and echocardiography have improved the detection of subclinical rheumatic carditis. It has been reported that subclinical mitral stenosis can persist even after five years of follow-up, thus emphasising the importance of echocardiography in the diagnosis of subclinical mitral stenosis.8 With better detection and early treatment of rheumatic fever there has been a significant drop in the prevalence of mitral valve stenosis in Europe. However, London is a multi-ethnic city with a population of about nine million. Brent is a borough with a population of 263,464 (in 2001) with its ethnic distribution demonstrated in figure 1.9

Referral of the patients was made by their general practitioners for the investigation and management of various cardiac symptoms, or if there was either of the following: the presence of a significant cardiac history of myocardial infarction, coronary bypass surgery or percutaneous interventional procedures, cardiomegaly on a routine chest X-ray, uncontrolled raised blood pressure, suspicion of white-coat hypertension, atrial fibrillation, or abnormal resting electrocardiogram (ECG) indicating arrhythmia, conduction defects, ischaemic changes or abnormal repolarisation. Full history was obtained followed by a full cardiovascular clinical examination. Each patient underwent a resting ECG and a resting transthoracic echocardiogram using Vivid I (manufactured by General Electric, GEMS ultrasound, Tirat Carmel, Israel).

Patients with mitral stenosis alone were enrolled into the study (n=8, mean age 46 years, standard deviation [SD] 3.76). The mitral valve area was derived from averaging that derived from the pressure half-time and that derived from planimetry. Grading of mitral stenosis was made in accordance with the British Society of Echocardiography guidelines.10 In order to elucidate the presence or absence of paroxysmal atrial fibrillation, Holter monitoring was carried out in the seven subjects who had dilated left atrium. Subsequent cardiac catheterisation was carried out in two patients because of the echocardiographic findings of mixed aortic valve disease beside the severe mitral valve stenosis in one patient and the other due to her subsequent admission with pulmonary oedema.

The ethnic distribution of the patients referred to our clinics is demonstrated in figure 2.

The main results on the eight patients diagnosed by echocardiography to have mitral valve stenosis are summarised in table 1. Rheumatic echocardiographic features were present in all the patients. Typical clinical signs of mitral stenosis were present in three patients only. One patient also had prolapse of the anterior leaflet of the mitral valve. All the eight patients had mitral valve regurgitation. Two patients had an elevated clinic blood pressure >140/90 mmHg and four subjects had left ventricular hypertrophy (two of whom were referred because of uncontrolled raised blood pressure). Although none of the patients gave a history of rheumatic fever, six subjects had typical rheumatic changes on the mitral valve. All patients were in sinus rhythm clinically and during 24-hour ambulatory ECG monitoring. The left atrium was dilated in seven patients. One patient (RC) also had severe aortic valve disease. The latter patient underwent an elective cardiac catheterisation, which confirmed severe mitral and aortic valve disease. One of the subjects (SB), who was referred because of dyspnoea on exertion, while waiting for cardiac catheterisation was admitted to the Accident and Emergency Unit of our Hospital with acute dyspnoea and was found to be in pulmonary oedema. Both these patients (SB and RC) underwent mitral valve replacement successfully.

In this report, we have demonstrated that subclinical mitral stenosis is still in existence, though with a low prevalence, in patients of different ethnic backgrounds referred for various cardiac causes to a community cardiology service in a district of London. The highest prevalence was among the Indo-Asian community, which constituted the largest of the ethnic groups referred to our clinics. Only three of the eight patients had clinical signs of mitral stenosis, although not detected by their general practitioners. Our findings are in support of a previous report8 that echocardiography and Doppler ultrasound are very useful tools to detect clinically unrecognised carditis. The value of echocardiography was also previously demonstrated in the diagnosis of rheumatic valvular insufficiency.11-13 Seven of our patients were symptom free when seen in the clinic. Early diagnosis of mitral valve stenosis using echocardiography is the only way to identify cases of rheumatic mitral valve disease at an early stage and allow the appropriate management, irrespective of patient’s ethnicity.

Similar to other previous reports,8,11,12 our findings have confirmed the value of echocardiography and Doppler ultrasound in identifying rheumatic carditis in the absence of clinical signs and/or symptoms. In one study, the number of patients with rheumatic carditis detected by echocardiography was reported to be four times higher than the number of patients detected clinically.14

Atrial fibrillation, which first appears in its paroxysmal form then becomes persistent, constitutes the most common complication of mitral valve stenosis.5 It affects 40% of cases of mitral stenosis.7 Atrial fibrillation is related to left atrial dilatation and left atrial hypertension.3 Although all of our patients except one had left atrial dilatation, all were in sinus rhythm. The majority of our subjects are liable to develop atrial fibrillation, which is the most common clinical entity that causes the development of symptoms in a previously asymptomatic subject. It is, therefore, important that the clinician and the general practitioner are made aware of this possibility. A proper follow-up of these patients is necessary in order to spot the appearance of atrial fibrillation at an early stage and implement the use of the appropriate medication and anticoagulation therapy. Furthermore, implementing the appropriate steps, as set up in the current guidelines, is necessary in the follow-up of those subjects.15 Accordingly, in our study, the six subjects who did not undergo invasive management because they were asymptomatic, with pulmonary artery systolic pressure estimated at <50 mmHg and mild-to-moderate mitral stenosis, should be followed up annually.

The cohort studied does not represent the ethnic distribution of the Brent population. The majority (51%) of the subjects referred to our clinic were of Indo-Asian origin (figure 2) as compared with 28% of the general Brent population (figure 1). This, therefore, may be one of the reasons why the highest prevalence of rheumatic mitral valve stenosis appeared to be among subjects of Indo-Asian origin. There have been few reports on the ethnic distribution of mitral valve stenosis, mostly reporting on regional incidence of symptomatic cases in individual countries. To our knowledge, there have been no reports on the incidence of asymptomatic cases of mitral stenosis in individual ethnic groups. It has been reported that the prevalence of symptomatic mitral stenosis in central Europe is two per 1,000.16 Although there are only a few population surveys in India for the prevalence of rheumatic heart disease, the few available community surveys indicate that until 1994 there were more than one million patients with rheumatic heart disease with at least 50,000 new episodes occurring every year.17 Despite that, rheumatic heart disease in India is most frequent among school children,17 in a report from a medical centre in Chennai in India, mitral stenosis was shown as the most dominant lesion of rheumatic heart disease at an incidence of 29.4% of people aged 18 years or over.18

The Indo-Asian subjects in our current study, who were immigrants from the Indian subcontinent, ranged in age between 33 and 60 years and represented a small sample of the 28% of the Brent population in London. This may suggest that further studies are needed to investigate the prevalence of mitral valve disease in such a population, and equally in the rest of the Indo-Asian population in the UK.

Rheumatic mitral valve stenosis still exists and provides a challenge to medical practice when it is clinically unrecognised. The majority of the patients with this lesion in our study were of Indo-Asian origin. It was only possible to diagnose these cases of mitral valve stenosis with echocardiography, although, in retrospect, three patients had typical clinical signs. Regular follow-up of such patients is necessary in order to assess the progress of the mitral stenosis and to diagnose atrial fibrillation early.

We thank Ms Dinta Tailor from Physiological Measurements for her technical assistance.

Acute Takotsubo cardiomyopathy as a complication of transoesophageal echocardiogram

Multiple left atrial masses in a patient with breast cancer

Book review: Echocardiography – a practical guide for reporting and interpretation