Persistent hyponatraemia is common in ambulatory HF patients in the community and is associated with worse clinical outcomes. It is also an independent predictor for mortality and HF hospitalisations. General practitioners are uniquely positioned to identify patients with hyponatraemia and ensure regular monitoring and appropriate referrals are instigated. 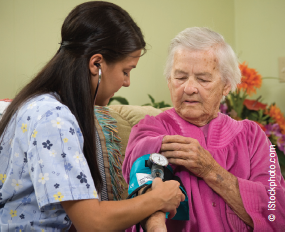 Hyponatraemia is a common electrolyte disorder among patients with heart failure (HF), nephrotic syndrome or cirrhosis.1-3 It is recognised as a predictor of adverse outcomes in hospitalised patients with these conditions,4-5 and its prognostic implications are commonly attributed to the severity of the underlying pathology.

Patients admitted to hospital with decompensated heart failure have a poor prognosis, with in-hospital mortality rates approaching 10%.5-7 Hyponatraemia associated with decompensation results in added adverse outcomes resulting in high 30–90-day mortality and re-hospitalisation rates.5-9 These results have been borne out of large clinical trials conducted in patients with acute HF. In the Outcomes of a Prospective Trial of Intravenous Milrinone for Exacerbations of Chronic Heart Failure (OPTIME-CHF) trial,9 27% of the patients had baseline hyponatraemia on admission. Similarly, in the more recent Evaluation Study of Congestive Heart Failure and Pulmonary Artery Catheterization (ESCAPE) trial,10 24% had hyponatraemia at baseline. Among the almost 48,000 patients enrolled in the Organized Program to Initiate Life Saving Treatment in Patients Hospitalized for Heart Failure (OPTIMIZE-HF) registry,8 nearly 26% had hyponatraemia at admission.

Mild hyponatraemia is relatively common in ambulatory patients with HF in the community,11-13 and yet the scarcity of data regarding the prognostic value of serum sodium concentration in the context of the patient’s clinical course and the persistence of mild electrolyte imbalance in this patient cohort is alarming. We reviewed our retrospective experience of persistent mild hyponatraemia in HF patients in the community and evaluated its effect on short-term clinical outcome.

The Leicestershire County and Rutland Primary Care Trust (LCRPCT) is in a fairly rural setting with a population of 750,000 according to the 2001 census. Approximately 0.8% of the population have been identified with left ventricular systolic dysfunction (LVSD).

The specialist HF team comprises a group of five full-time equivalent advanced nurse practitioners with clinical supervision by a community physician (cardiology). The team work closely with local general practitioners (GPs) and, indeed, local GPs refer patients directly to the team. The strategy of the Community Health Services of LCRPCT for delivering specialist care for long-term conditions is to develop models of care within other chronic diseases and to centrally locate the running and administration of the service through a single point of access, also known as the LTC Hub. Although clinicians will work along care pathways of the disease, they will coordinate care for all patients with co-morbid conditions ensuring that the right clinician with the appropriate skills responds to the changing needs of patients.

A central tenet of the service is to work in an integrated manner with all clinicians who could possibly manage the patient. HF patients are referred into the service by GPs following diagnosis for case management, secondary-care physicians post-hospitalisation and other internal stakeholders within the PCT.

In the current study, we analysed 426 patients with HF and hyponatraemia (between 125 and 135 mmol/L) under the care of the team between June 2007 and November 2008. The current population represents 19% of the total HF patients in the area under supervision. This was compared with a randomly matched control group of 200 patients with normal serum sodium values.

The diagnosis of HF was initially made by a secondary-care physician based on history, symptoms and physical signs, and validated by transthoracic echocardiography. The baseline characteristics and clinical data of the patients are recorded in table 1. In brief, the mean age of the study group was 77.3 ± 12.4 years and 78.5 ± 10.5 years in the control group (p=NS). Mean age of the total population was 77 ± 11 years and 45% of patients were women. There were slightly more males in the study group than the control group but this did not reach statistical significance. Hyponatraemia was defined as serum sodium <136 mmol/L.13 Patients were followed up during the entire study period. Cause of death and hospitalisation date were ascertained using hospital records, death certificates and hospital autopsy records.

Patients with hyponatraemia had lower estimated glomerular filtration rates (eGFRs) and higher prevalence of diabetes mellitus as a co-morbid condition. There were no statistical differences between the usage of pharmacological treatments between the hyponatraemic and control groups.

Patients were assigned into four groups based on their serum sodium: Group 1 (n=210), 133–135 mmol/L; Group 2 (n=123), 129–132 mmol/L; Group 3 (n=93), 125–128 mmol/L; Group 4 (n=200), >135 mmol/L. Statistical analysis was carried out on these groups. This division of the groups was in line with treatment guideline protocols used by the clinicians in managing their patients with low serum sodium. Patients were admitted into the study with baseline sodium levels below 136 mmol/L and they had to have sodium levels persistently below 136 mmol/L for at least three months previous to entry into the analysis.

Statistical analysis was performed using SAS. Statistical methods included the Chi-square test and ANOVA. A p value <0.05 was considered statistically significant. To obtain the distribution curve for the survival time depending on the serum sodium concentration at the time of admission, an estimated value of Kaplan-Meier was calculated, and differences in survival time were analysed using the log-rank test. A hazard ratio for the concurrent presence of complications depending on the severity of hyponatraemia was obtained using logistic regression analysis. To estimate the trend in risk of one-year mortality, we employed spline functions for baseline serum sodium.

On univariate analysis, baseline sodium predicted the likelihood of survival, with a relative risk of death from any cause of 1.07 for each 1 mmol/L decrease in sodium (95% confidence interval [CI] 1.05 to 1.10; p<0.001) (table 2). After adjustment for demographic data, clinical characteristics, and medical treatment, the relation proved to be still significant (table 2). On multi-variable analysis, the association of sodium and mortality appeared linear across the quartile groups and slightly stronger at the lowest end values of serum sodium (table 2). Analysed as a categorical variable, hyponatraemia was a powerful predictor of one-year mortality on univariate analysis (hazard ratio [HR] 1.48, 95% CI 1.42 to 2.61; p<0.001) and after adjustment of co-variates (HR 1.88, 95% CI 1.41 to 2.62; p<0.001) (table 2).

Lower serum sodium was also associated with an increased relative risk for re-hospitalisation on univariate analysis (HR per 1 mmol/L decrease in serum sodium 1.18, 95% CI 1.03 to 1.30; p<0.001). This association remained strongly significant after adjustment for co-variates (table 2).

This analysis demonstrates for the first time that persistently hyponatraemic community patients with HF have a higher risk of the composite end point of death and re-hospitalisation at one year than normo-natraemic subjects. Patients with persistent hyponatraemia (<136 mmol/L) were at a very high risk of adverse outcomes and had impressive excess re-hospitalisation rates compared with the control group.

The prevalence of hyponatraemia (<136 mmol/L) in hospitalised patients ranges from 5–13% depending on the length of stay of the patients.5-10 The prevalence range increases to 20–30% when the patient is admitted with acute HF.9,10,14 The prevalence in community patients with HF is relatively unknown. Certainly, in our own population, it is predicted at 5–8%.

Hyponatraemia may be a consequence of excessive diuretic therapy and may also contribute to a pathogenic effect.15,16 Previous reports have demonstrated that diuretic use has not been linked with excess mortality or myocardial infarctions in community subjects without pre-existing heart disease. Exploratory analyses showed that hyponatraemia in these subjects, who did not use diuretics, carries a highly significant and independent risk of death or myocardial infarction of three- to eight-fold compared with control subjects.11 In the present study, however, >90% of patients in both groups were exposed to loop diuretics. On further examination, the median doses of the drugs administered were similar in both groups.

It has been previously reported that hypervolaemic hyponatraemia may represent a marker of neurohormonal activation in patients with systolic HF.17-19 Increased activation of the renin–angiotensin–aldosterone system (RAAS) and excessive or inappropriate arginine vasopressin release in response to non-osmotic stimuli are the main mechanisms responsible for hyponatraemia in patients with LVSD. Alternatively, the association between mild hyponatraemia and mortality may have a physiologic basis as proposed by other investigators.20 Maintenance of serum osmolality and sodium concentrations within narrow boundaries is a hallmark of all mammals.21,22 Sodium concentrations affect three-dimensional conformations of proteins and enzymes, and, thus, play a critical role in maintaining electrical gradients across cellular membranes and in muscular excitation. The effects of serum sodium concentrations on brain function have been relatively well studied.23 It is within the realms of possibility that these small changes in sodium concentration may have attenuated deleterious effects on cardiac muscle function in patients with chronic HF. The effects of low sodium on cardiac muscle warrant further study.

This study, which is the first to examine the predictive value of hyponatraemia in community HF subjects, has several limitations. First, it is a retrospective case analysis with all its noted weaknesses. Second, the association between serum sodium and outcomes might have been influenced by factors beyond the documented variables tested. Lastly, we were not able to define causes or chronicity for the hyponatraemia in our cohort. The distinction between euvolaemic, hypervolaemic and hypovolaemic hyponatraemia is a critical first step in differential diagnosis, but impractical when conducting a large-scale observational study. In addition to a detailed clinical evaluation, this distinction requires diagnostic testing that was not available to all patients and required clinician acumen.

In the UK, most patients with LVSD are managed within general practice. This is similar to many countries throughout the Western world. The follow-up of patients admitted to hospital with decompensated HF resides mainly with the GP. There are sparse community-based specialist HF teams within the UK to assist GPs. This study concentrated on the cohort of patients who had been admitted to hospital and subsequently managed by a specialist community team. It would appear that hyponatraemia is an independent risk factor of future morbidity and mortality within this cohort and should alert GPs to the need for regular monitoring for hyponatraemia and timely intervention in these patients. It was not the scope of the study to look at the specific causes of hyponatraemia or indeed interventions to correct them, however, through the course of the study the intervention of the specialist community HF team did not seem to affect the ongoing issues with hyponatraemia in these patients. A prospective trial looking at the causes and potential interventions to correct hyponatraemia with potential improvement in morbidity and mortality in the community setting is required. However, as these patients are at high risk, it is the contention of the authors that patients with LVSD and hyponatraemia should be referred to a specialist team – either within the community or within a hospital setting. At a time when GPs within the UK are incentivised through the Quality and Outcomes Framework method of payments24 to identify and manage patients with HF, it would seem that identifying those most at risk of future morbidity (hospital admissions) and mortality, as evidenced by persistent hyponatraemia, may be a useful addition to the quality indicators.

To conclude, hyponatraemia is common in the community setting in patients with HF, and is independently associated with a higher risk of short-term mortality and re-hospitalisation for decompensation. Future research should be directed to ascertain whether resolution of the hyponatraemia can alter outcomes in these patients.