The hearts of the medical, sporting and lay communities were captured by the public cardiac arrest of 24-year-old midfielder Fabrice Muamba, during a football match in March 2012. His case was exceptional in that he survived because expert help was at hand immediately but, sadly, most young victims of sudden cardiac arrest do not live to hospitalisation. There are approximately 60,000 cases of sudden cardiac death in the UK each year,1 the majority of which occur in older adults and are predominantly attributed to ischaemic heart disease or heart failure. In contrast, there are around 600 sudden deaths per annum in young people affected by inherited structural and electrical disorders of the heart, notably the cardiomyopathies and ion channelopathies.2 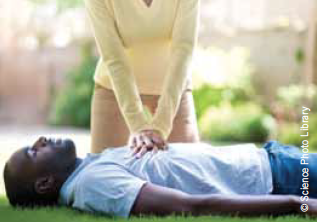 The recent case report by Westaby et al. (see pages 141–3) highlights yet another tragic example of sudden cardiac arrest (SCA) in a young person. Despite the best efforts of the medical team managing her, this 20-year-old student died following an episode of idiopathic ventricular fibrillation. Following more than 70 cardioversions and the use of high dose anti-dysrrhythmic therapy, it took over 80 minutes to establish sinus rhythm. Over the subsequent six hours, she became hypotensive, oliguric and acidotic, but her pupils remained reactive to light. However, following the insertion of an intra aortic balloon pump and re-introduction of noradrenaline, she continued to relapse into ventricular fibrillation and required further cardioversions.

The patient was deemed a suitable candidate for mechanical circulatory support and an extra corporeal membrane oxygenation (ECMO) device was sought from a manufacturer. The device was successful in restoring her systolic blood pressure and substantial improvements in her ventricular function were observed. Within several hours, however, her pupils became unreactive to light and, regrettably, a CT scan demonstrated cerebral oedema and herniation through the foramen magnum.

Westaby et al. contemplate whether this young life could have been saved if ECMO had been more readily available before end organ damage had ensued. They assert that all tertiary cardiac centres should have the opportunity to treat cardiogenic shock with ECMO, when indicated. We consider whether improving access to ECMO would help to reduce mortality in young people with incessant fatal ventricular arrhythmias.

Extra corporeal membrane oxygenation has assumed a role in the treatment of reversible acute respiratory and cardiac disease since Gibbon4 invented the first mechanical heart and lung apparatus in 1953. To date, ECMO has most commonly been used in neonatal intensive care units to support premature babies suffering from respiratory distress syndrome, and following cardiothoracic surgery, to ease the transition between cardiopulmonary bypass and mechanical ventilation. It was also utilised during the H1N1 swine flu outbreak in 2009 and was associated with a significant improvement in survival rates.5

There are two types of ECMO treatments available: venovenous, offering a gentler alternative to mechanical ventilation, and venoarterial, which is primarily utilised to support the heart in low cardiac output states. Venoarterial ECMO offers clinicians an artificial means to perfuse vital organs, whilst gaining valuable time to conduct further investigations and establish a diagnosis. It is typically instituted for three to 10 days until the patient either recovers, receives a ventricular assist device (VAD) or becomes a candidate for cardiac transplant surgery. Venoarterial ECMO is not widely available in England at present, with only five hospitals offering the treatment to adult patients, although Europe’s largest ECMO centre is based at Glenfield Hospital in Leicester, where the treatment has been provided since 1991.

Is venoarterial ECMO a safe and effective treatment?

Whilst venoarterial ECMO offers patients the chance to preserve their renal, cerebral and coronary circulations, the treatment is not without risk. Potential side effects include gastrointestinal haemorrhage, disseminated intravascular coagulation, thromboemboli in the ECMO systems, septicaemia, neurological injury and heparin induced thrombocytopaenia.8,9 But these side effects are less significant when placed in context with the alternative outcome, notably the demise of a young individual.

It is clear from the Westaby et al. case that their patient’s systolic blood pressure responded well to ECMO and that her hepatic and renal function were satisfactory enough for her to become an organ donor. However, it is impossible to be certain or predict the stage at which she sustained anoxic brain injury and whether initiating ECMO earlier would have prevented her tragic death. As acknowledged in the case report, there were delays in transferring the patient to the Accident and Emergency unit and in repositioning her defibrillator electrodes into the more effective antero-posterior position and these factors may have had some bearing on the final outcome.

Westaby et al. state that ECMO is used routinely in the United States and Europe as a first line treatment for cardiogenic shock, and they consider whether there are too many restrictions on life saving technologies in the UK. Ensuring that every tertiary cardiac centre in the UK had access to its own ECMO facilities would require considerable NHS funding and figures based on the experience of Glenfield Hospital in 2009/10 suggest that the cost of ECMO treatment is approximately £45,000 per recipient.10

Despite the cost issues, the availability of ECMO would seem prudent in major heart attack centres that are likely to be dealing with all forms of SCA. Ion channel disorders exhibit relatively low event rates in general and the subsequent implantation of a cardiac defibrillator offers significant protection from arrhythmogenic sudden cardiac death. When one considers that intervention in a young individual is likely to yield several decades of life, the price appears to be a relatively trivial one to pay.

See also the article by Westaby et al. on pages 141–3 of this issue.

Lessons learnt from a tragic loss