Effective communication is known to increase patient satisfaction and correlates with improved health outcomes. Efforts have been made in recent years to improve communication skills through the use of less complex terminology. This study tests the hypothesis that patient understanding of more simplified terms can be limited and overestimated by doctors.

Questionnaires were distributed to hospital inpatients. Patients were asked to define 10 commonly used cardiology terms. The definitions were graded individually according to their accuracy. Doctors were then asked to predict the percentage of patients who they thought would correctly define each term via an online questionnaire.

A total of 57 questionnaires were returned. The most poorly understood terms were ‘heart attack’, ‘echo’, ‘leaking heart valve’ and ‘heart failure’ with partially or completely correct definitions offered in only 24.6%, 17.5%, 22.8% and 22.8%, respectively. Approximately 40% of patients felt that too much terminology was used and that explanations offered were inadequate. Doctors’ estimations of patient understanding of these terms were generally inaccurate and prone to overestimation.

In conclusion, the cardiology terms chosen were poorly understood by the surveyed patient population, and understanding was frequently overestimated. Caution should be used when using these terms without further clarification. 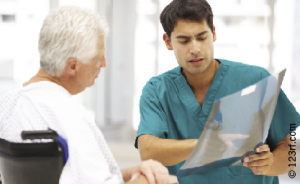 Effective communication is known to improve patient satisfaction,1 and has been correlated with improved health outcomes.2 It is estimated that the medical student learns up to 10,000 new words during the course of their medical degree.3 Doctors frequently employ this new vocabulary in patient consultations, leading to jargon that is potentially misunderstood,4 thus, impairing effective communication. A heavy emphasis is now placed on communication skills at medical school to reduce usage of this type of jargon and use more simplified terms. Patient understanding of commonly used cardiology terminology and doctors’ estimation of this understanding has not been researched previously. This study aims to test the hypothesis that patient understanding can be limited and overestimated by doctors.

Understanding of cardiology terms was studied through the use of questionnaire forms distributed to hospital inpatients. Patients were asked to define 10 commonly used cardiology terms. The definitions were graded individually according to their accuracy. Doctors were then asked via an online questionnaire to predict the percentage of patients who would correctly define each term.

The full questionnaire is shown in Appendix 2. Patients were asked to write down their understanding of the following commonly used simplified terms (table 1). Terms describing investigations, treatment and diagnoses were specifically chosen as they may be commonly used in consultations without further clarification or simplification. Patients were given an information sheet, the opportunity to ask any questions about the terms chosen after responses had been completed and to subsequently see the results of the study. Formal ethics approval was not sought as no interventions were made and time set aside for appropriate counselling as above.

In addition, patients were asked whether they felt doctors use too much terminology, and if terminology is adequately explained. Patients with poor eyesight were interviewed directly with their exact responses transcribed by the interviewer.

The questionnaires were subsequently marked by two doctors independently, who graded each answer into one of three categories (table 2). Marks were then compared. Answers for which a different grade had been awarded were discussed before a final grade was determined.

All medical junior doctors and registrars at RBH were then subsequently invited by email to participate in an online survey in which they were asked to estimate the percentage of patients who they thought would correctly define the terms. The actual response from patients was then compared with this estimation.

A total of 70 questionnaires were distributed with 57 completed responses: 36/57 (63.1%) were cardiology inpatients, the remainder 21/57 (36.8%) were respiratory inpatients. A complete summary of the questionnaire results is shown in table 3 and figure 1.

A total of 26/57 (45.6%) of patients felt that too much terminology was used by medical staff during their inpatient stay. Explanations of terminology used were felt to be inadequate according to 23/57 (40.3%) of respondents.

A total of 26 doctors responded to the online survey in which they were asked to estimate the percentage of patients (to the nearest 10%) who they thought would completely understand each term. The responding doctors were at various stages of training comprising Specialist Registrars (30.8%), Senior House Officers (57.7%) and Foundation Year 1 Doctors (11.5%). The majority (59.3%) of respondents had previously completed a cardiology rotation or were currently working in cardiology. These results are summarised in table 4.

The results reveal poor overall understanding of the terms chosen. There is marked variability between the different terms, however, only ‘blood-thinning medication’ and ‘stent’ achieved partial or complete understanding of greater than 50% (75.4% and 71.9%, respectively). The terms ‘heart attack’, ‘echo’, ‘heart failure’, and ‘leaking heart valve’ were given incorrect definitions by over 75% of respondents with even commonly used terms, such as ‘heart attack’, only completely understood by 10.5%. The content of the written submissions also revealed interesting insights. The terms cardiac arrest and heart attack were frequently confused. The same explanation was offered for both in five questionnaires, with cardiac arrest and heart attack offered as definitions of each other. Cardiac arrest was defined as an arrhythmia in seven questionnaires. However, the most common misconception was that of heart failure. This was essentially defined as cardiac arrest by over 25% of respondents. The results show that extreme caution should be used when using the term heart failure and that, when used, further careful explanation should follow.

This has potential significant implications. These terms, especially during busy inpatient ward rounds or outpatient clinics, are frequently used without further explanation and, sometimes, without checking patient understanding. Approximately 40% of patients felt that too much terminology was used and that explanations were inadequate.

Reasons for this poor understanding of the terms listed are likely to be multi-factorial. Given the immense publicity and public education surrounding heart disease, it seems surprising that rates of understanding were so low, particularly for a term like ‘heart attack’. However, media portrayal of certain terms can occasionally be inaccurate leading to potential misinformation. The perception that too much terminology is used and that explanations were inadequate, suggests that poor communication from the medical team plays a significant part. Consultations are often highly limited by time constraints and the opportunity for good, concise explanations may be curtailed.

The second part of the study shows that, even with enough time during consultations, doctors may not feel that further clarification or explanation is in fact necessary, fairly consistently overestimating patient understanding. Although rates of understanding of the terms ‘stent’, ‘arrhythmia’ and ‘blood-thinning medication’ were generally underestimated, understanding of the remaining terms, particularly ‘heart attack’, ‘heart failure’, ‘blood pressure’, ‘tracing of the heart’ and ‘leaking heart valve’, was highly overestimated.

Causes may include the possibility that with constant day-to-day exposure to medical terminology it becomes difficult to recall which terms are not obvious to the general public without medical training. Additionally, patients are often reluctant to ask for explanations, even when content is not fully understood. This may positively reinforce a doctor’s perception that terminology used was appropriate.

There is an interesting discrepancy between the relatively high rate of patient misunderstanding of these terms and their comparatively low rate of dissatisfaction with the quality of communication (approximately 40%). It is possible that patients are often reluctant to complain or register dissatisfaction in this type of study and questionnaire.

Limitations of the study include a relatively small sample size and possible selection bias. The selected inpatient group was a relatively vulnerable and elderly subsection when compared with the general population, but also included cardiology patients who may be knowledgeable with regards to their illness and may have previously undergone cardiac rehabilitation. Patients had different lengths of stay in hospital and a mix of patients both pre- and post-intervention were included. Clearly all of these factors may influence rates of understanding, however, since this exact population is often the intended recipient of the terms studied, we maintain that the results are highly relevant and valid. Although the response rate was reasonably good with 57/70 (81%) questionnaires returned, non-response bias remains possible and reasons for questionnaires not being filled out in the 13 cases were not pursued. There may be reluctance to return a questionnaire that may reflect perceived poor performance. This study may indeed overestimate patient understanding due to this effect. Whether a patient correctly, partially correctly or incorrectly identifies the terms is also at times a subjective opinion. The study was designed to minimise this effect by ensuring that questionnaires were marked independently and that any subsequently identified discrepancies were discussed prior to the award of an overall mark. There was agreement in 92% of the marks awarded suggesting relatively few inconsistencies.

The impact of COVID-19 on cardiology training

Women not in cardiology: where are we going wrong? A survey of the perceptions and barriers to training