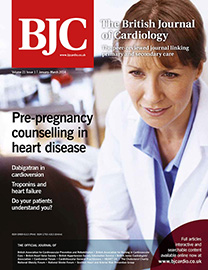 National life-expectancy is steadily rising with the number of those aged 85 years or over doubling from 1985 to 2010,1 and ever more elderly patients presenting to cardiology. Age is a potent risk factor for mortality after acute coronary syndrome (ACS),2 and older patients with angina present with more severe symptoms and prognostically significant coronary anatomy.3 Age has a very powerful influence on risk stratification tools such as GRACE (Global Registry of Acute Coronary Events), and National Institute for Health and Care Excellence (NICE) guidance supports early invasive investigation and management for high-scoring patients.4 Diagnostic coronary angiography (DCA) is crucial to assessing the cross-spectrum of coronary disease presentation. Despite this, elderly patients are less likely to be treated in accordance with best practice after presenting with ACS,5,6 the so-called ‘risk paradox’. Concern about the safety and efficacy of DCA and percutaneous coronary intervention (PCI) in the more elderly population seems to underpin this behaviour.

There is in fact a wealth of data to indicate that DCA in the elderly has acceptable complication rates,7 and that revascularisation, surgical or by PCI, offers significant benefit.5 The study by Walsh and Hargreaves (see page 37) is welcome in further describing the fallacies of current practice, which fall short of best practice.6

The importance of pre-pregnancy counselling in cardiac disease

Cardiac disease remains the commonest cause of maternal death in the UK. While some deaths are unavoidable, pre-pregnancy counselling for women with acquired or congenital heart disease is important and counselling should be viewed as the mainstay of clinical practice. It provides women with information about the risk a pregnancy may pose to their health and to that of a foetus and provides an opportunity for an up-to-date assessment of the cardiac condition and a medication review. All cardiologists should recognise the need to raise the issue of pregnancy whenever a diagnosis of acquired heart disease is made in a woman of childbearing age. Although women with heart disease are at increased risk during pregnancy, the majority of women will have a good outcome with careful management.

Troponin levels are used in the diagnosis of acute coronary syndromes (ACS), however, levels may be elevated in many other conditions. A significant proportion of patients with stable heart failure (HF) have detectable levels of troponin using standard assays, however, the incidence of detectable levels of high-sensitivity troponin T (hsTnT) in HF patients is not extensively studied. As part of a trial assessing vascular function in stable HF patients, 32 subjects had hsTnT levels measured at baseline using a multi-channel analyser (Roche E Module). At baseline, 27 (84.4%) patients had detectable levels of hsTnT (median 13.8 ng/L, range 9.2–21.4): 12 (75%) patients in the non-ischaemic group and 15 (94%) in the ischaemic group. A total of 14 (43.8%) patients had levels above the 99th percentile of the normal range.  The majority of patients with stable HF will have detectable levels of troponin T using new high-sensitivity assays. A significant proportion of these will be above the cut-off point used for diagnosis of ACS. If these patients present to hospital, modest elevations in hsTnT do not necessarily indicate recent ACS, and serial measurements should be undertaken if clinically indicated.

Effective communication is known to increase patient satisfaction and correlates with improved health outcomes. Efforts have been made in recent years to improve communication skills through the use of less complex terminology. This study tests the hypothesis that patient understanding of more simplified terms can be limited and overestimated by doctors.  Questionnaires were distributed to hospital inpatients. Patients were asked to define 10 commonly used cardiology terms. The definitions were graded individually according to their accuracy. Doctors were then asked to predict the percentage of patients who they thought would correctly define each term via an online questionnaire. A total of 57 questionnaires were returned. The most poorly understood terms were ‘heart attack’, ‘echo’, ‘leaking heart valve’ and ‘heart failure’ with partially or completely correct definitions offered in only 24.6%, 17.5%, 22.8% and 22.8%, respectively. Approximately 40% of patients felt that too much terminology was used and that explanations offered were inadequate. Doctors’ estimations of patient understanding of these terms were generally inaccurate and prone to overestimation.  In conclusion, the cardiology terms chosen were poorly understood by the surveyed patient population, and understanding was frequently overestimated. Caution should be used when using these terms without further clarification.

Statins: are they wonder drugs?

Statins are ‘HMG-CoA reductase’ (3-hydroxy-3-methylglutaryl-CoA reductase) inhibitors and attenuate the intracellular levels of cholesterol. By virtue of their multiple pleiotropic modes of action in cardiovascular diseases, statins have also been considered and used for treating various other disorders, with convincing beneficial results, though a few contradictory reports do exist. Taking into account the positive and negative effects of statins, the data need to be viewed with a ‘pinch of salt’ for statins to be labelled as wonder drugs.

In a retrospective, case-controlled study, we examined the influence of diagnostic cardiac catheterisation (DCC) on the management of a cohort of very elderly patients (aged over 80 years). Peri-procedure complications were also determined. Study and control patients (aged less than 70 years) were randomly selected from patients who had undergone DCC over the previous five years. Data were collected on the primary treatment outcome (immediately following DCC) and the secondary outcome – the treatment the patient eventually received. We found that, while those in the very elderly group (n=100) were more likely to be referred for surgical intervention as a primary outcome, there was no overall difference in secondary outcome between the two groups. There was no difference in peri-procedural complications between the two groups. We observed that, in very elderly patients, DCC is both safe and contributes to clinical management to a similar degree compared with younger patients.

Anticoagulation prior to direct current cardioversion (DCCV) is mandatory to reduce the risk of thromboembolism. We examined the impact of the use of dabigatran as an alternative to warfarin on the efficiency of an outpatient DCCV service. A total of 242 DCCVs performed on 193 patients over a 36-month period were analysed. Patients were divided into two cohorts; cohort A included cases in the 22-month period before the introduction of dabigatran and cohort B included cases in the 14-month period after the introduction of dabigatran. All patients in cohort A received warfarin. In cohort B, 48.4% received dabigatran. A larger number of patients from cohort A were rescheduled due to subtherapeutic international normalised ratios (INRs) compared with cohort B (42.1% vs. 15.6%, p<0.001). Those who received dabigatran had significantly lower rates of rescheduling compared with those who received warfarin (9.7% vs. 34.4%, p<0.001). The length of time between initial assessment and DCCV was 24 days shorter in cohort B than cohort A (p<0.001) and 22 days shorter with those who took dabigatran than warfarin (p=0.0015). Outcomes in achieving and maintaining sinus rhythm were comparable in both cohorts and anticoagulants (all p>0.05). This study demonstrates that the use of dabigatran can improve the efficiency of an elective DCCV service.

Draft guidance on statins The National Institute for Health and Care Excellence (NICE) is recommending that the threshold for starting statins for the preventive...

News in brief from the world of cardiology...

My top 10 tips for ECG interpretation

In this new regular series ‘ECGs for the fainthearted’ Dr Heather Wetherell will be interpreting ECGs in a non-threatening and simple way. Confident interpretation...

The 16th Annual Autumn Meeting of the British Society for Heart Failure (BSH) entitled ‘Making sense of acute heart failure’, was held on 28–29...

The development of an effective business case for heart failure services was discussed at a meeting held at the Royal College of Physicians on...