Anticoagulation prior to direct current cardioversion (DCCV) is mandatory to reduce the risk of thromboembolism. We examined the impact of the use of dabigatran as an alternative to warfarin on the efficiency of an outpatient DCCV service. A total of 242 DCCVs performed on 193 patients over a 36-month period were analysed. Patients were divided into two cohorts; cohort A included cases in the 22-month period before the introduction of dabigatran and cohort B included cases in the 14-month period after the introduction of dabigatran. All patients in cohort A received warfarin. In cohort B, 48.4% received dabigatran. A larger number of patients from cohort A were rescheduled due to subtherapeutic international normalised ratios (INRs) compared with cohort B (42.1% vs. 15.6%, p<0.001). Those who received dabigatran had significantly lower rates of rescheduling compared with those who received warfarin (9.7% vs. 34.4%, p<0.001). The length of time between initial assessment and DCCV was 24 days shorter in cohort B than cohort A (p<0.001) and 22 days shorter with those who took dabigatran than warfarin (p=0.0015). Outcomes in achieving and maintaining sinus rhythm were comparable in both cohorts and anticoagulants (all p>0.05). This study demonstrates that the use of dabigatran can improve the efficiency of an elective DCCV service. 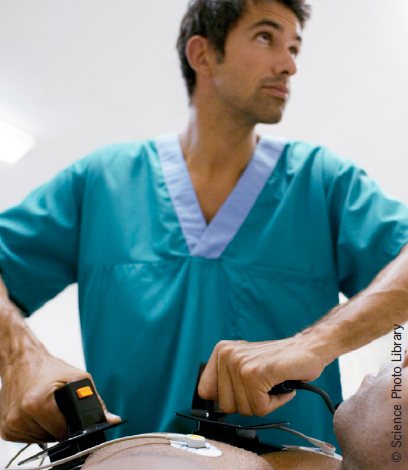 Atrial fibrillation (AF) is a common arrhythmia affecting approximately 1% of the general population, this rises to 18% in those aged 85 years and above.1 The most effective method for correcting persistent AF is direct current cardioversion (DCCV). However, DCCV is associated with an increased risk of thromboembolic events.2 Anticoagulation with warfarin reduces the risk of thromboembolism from approximately 6% to less than 1%.3

The current recommendations advise therapeutic anticoagulation for at least three weeks prior to, and four weeks after cardioversion.4 A nurse-led elective DCCV service at Raigmore Hospital was established in 2006 and, initially, warfarin was the only anticoagulant available. Frequent subtherapeutic international normalised ratios (INRs) resulted in the cancellation and rescheduling of many DCCV appointments, often at short notice, disrupting clinical services and patient care.

The new oral anticoagulant dabigatran, which became available recently, has been shown to be at least as effective as warfarin in preventing stroke in patients with AF.2,5 Dabigatran is a direct thrombin inhibitor with rapid onset of action, achieving peak plasma concentration within 30 minutes to two hours of administration, and patients do not require therapeutic INR level monitoring. From December 2011, we used dabigatran as an alternative to warfarin in suitable patients undergoing DCCV. We aimed to examine the impact of the use of dabigatran as an alternative to warfarin on our DCCV service.

All patients in cohort A received warfarin. Patients in cohort B were treated either with warfarin or dabigatran 150 mg twice daily. Although we primarily preferred dabigatran, since its introduction, those patients already established on warfarin with good therapeutic INRs and those with other indications for warfarin, namely metallic heart valves and recurrent pulmonary thromboembolism, were not switched to dabigatran.

All patients underwent initial clinical assessment in a nurse-led clinic, upon referral to our elective DCCV service, and were counselled regarding the procedure. Those who received warfarin had INR monitoring performed remotely by our specialist nurse. We required a strict 21 days of therapeutic INR (2.0–3.0) prior to cardioversion. Those on dabigatran were not monitored, although a single blood test was taken prior to DCCV in order to demonstrate some prolongation of activated partial thromboplastin time (aPTT). Strict compliance to anticoagulants was stressed in all initial assessments. As part of the consent process for DCCV, patients confirmed that they had been compliant with their medication. All patients underwent DCCV following a local standard operating policy under general anaesthetic with 50–150 J delivered using a biphasic defibrillation. All patients were reviewed again by our specialist nurse five weeks following DCCV to review the success of maintaining sinus rhythm by 12-lead electrocardiogram (ECG).

The following data were collected: patient demographics, anticoagulant therapy, positive echocardiographic findings, risk factors and comorbidities (CHA2DS2 VASc score). Rates of cancellation and rescheduling, time taken to DCCV and outcomes were compared between the two cohorts and between the two anticoagulant groups. Parametric data are presented as mean and comparison performed with Student’s t-test. Categorical variables are expressed as frequencies and percentages, and comparison performed with Chi-squared test. Fisher’s exact test was used to analyse values less than 10. All p values are two-sided and a p value of <0.05 indicates statistical significance. Ethics approval was not required for this service evaluation.

All patients in cohort A received warfarin, but only 48.4% received warfarin in cohort B. The anticoagulant used did not influence the outcome of achieving and maintaining sinus rhythm (tables 1 and 2). The mean CHA2DS2 VASc score for all patients was 2.2 ± 2.6. Cohort B and the dabigatran group had a lower CHA2DS2 VASc score (p=0.07 and p<0.001, respectively) (tables 1 and 2). There were two cases of transient ischaemic attack (TIA) post-DCCV in cohort A. Both of these patients were taking warfarin with adequate INR. There was one case of TIA in the dabigatran subgroup of cohort B.

There was no difference in the number of permanent cancellations between cohort A and B, nor between those who received warfarin and dabigatran (tables 1 and 2). Of those procedures permanently cancelled, 15 spontaneously returned to sinus rhythm (6%), eight patients withdrew (3%) and one was referred for AF ablation prior to their DCCV appointments (0.4%).

A significantly smaller number of patients from cohort B had their initial DCCV appointment rescheduled to a later date due to subtherapeutic INR compared with cohort A (15.6% vs. 42.1%, p<0.001). Those who received dabigatran also had significantly lower rates of rescheduling compared with those who received warfarin (9.7% vs. 34.4%, p<0.001) (table 2). This represents a 71.8% reduction in rescheduling rates (absolute reduction of 24.7%).

This analysis has shown for the first time that in a routine clinical setting, the use of dabigatran has reduced rescheduling due to subtherapeutic INR by more than 70%, and significantly reduced the time required to achieve safe elective DCCV.

Rescheduling of DCCV appointments due to subtherapeutic INRs disrupts clinical care, and the resulting inefficiency can escalate the overall cost of treatment. Dabigatran is particularly well suited for anticoagulation prior to elective DCCV due to its predictable therapeutic effects. In addition to the organisational disruption, short-notice rescheduling of DCCV appointments can pose great inconvenience to patients and carers, especially those who live in rural and remote areas who may have to travel significant distances to attend their appointments. The over 300,000 population that we serve is scattered across 12,000 square miles in the Scottish Highlands, an area approximately the size of Belgium.

We recognise that it is not possible for all patients to switch to dabigatran for practical reasons and because the indications licensed for dabigatran are still limited. Therefore, in addition to comparing dabigatran with warfarin, our analyses also included cohort B, which has a mix of patients taking either anticoagulant. Despite a mix, cohort B still outperformed cohort A in achieving greater efficiency in elective DCCV.

Potential impact on the UK

Our centre only serves 4% of the Scottish population and 0.4% of the population of the UK. We estimate that in excess of 13,000 DCCV are performed each year within the UK. If our experience was to be extrapolated to the UK population, an estimated 30–40% of these cases may be postponed, which has huge financial implications to the health service. Through the use of dabigatran, up to 5,000 cancellations could be avoided annually. The UK’s national tariff for each outpatient elective DCCV is currently £722.6 The cost saving from avoiding each cancellation can offset the more expensive initial prescription of dabigatran. In the UK, dabigatran costs £75.60 for 30 days’ treatment compared with warfarin, which costs between £0.86–£1.67 depending on the dosage required.7

Longer-term use of dabigatran

The predictable therapeutic effects of dabigatran also better suit most lifestyles, especially in patients with a heavy alcohol intake, which usually causes erratic INRs. Without the need for INR monitoring, dabigatran also has the potential to improve patients’ perception of their disease by abolishing the need to frequently attend health services. This will also lift considerable strain on primary care and haematology services. However, without the need for frequent monitoring, it can be difficult to identify those on dabigatran who are not compliant. As a safeguard, we routinely check the aPTT prior to DCCV to ensure it is at least elevated. Even a mild elevation in aPTT has been shown to be associated with clinically important levels of dabigatran.8 Furthermore, as part of the consent process for DCCV, patients confirmed and signed that they had been compliant with their medications. The use of dabigatran also eliminates the assumption that INRs for those who are on warfarin are therapeutic between weekly checks.

This was a non-randomised, single-centre study in a relatively small population. However, our clinical service would be considered ‘standard’ and, therefore, it is highly likely that these findings would be applicable to other DCCV services in most cardiac units in the UK. Furthermore, although the study is relatively small, the considerable size of the reduction in cancellations is likely to have an impact on other DCCV services.

This study demonstrates that the use of dabigatran instead of warfarin in patients undergoing a DCCV, reduced rescheduling and, thus, improved efficiency. Future studies can examine if other new anticoagulants, such as direct factor Xa inhibitors, produce similar effects with elective DCCV.

The authors would like to thank Consultant Anaesthetist Dr Charles Lee for his role in DC cardioversion cases.

6. Department of Health. Payment by Results in the NHS: tariff for 2013 to 2014. London: DoH, 2013. Available from: https://www.gov.uk/government/publications/payment-by-results-pbr-operational-guidance-and-tariffs