We analysed an epidemiological database of hospital admission and day-case statistics, constructing cohorts of people admitted for care for varicose veins or haemorrhoids, and comparing their experience of subsequent circulatory diseases with a control cohort. Compared with the control cohort, there was an elevated risk of deep vein thrombosis (DVT) in the varicose veins cohort (rate ratio 1.20; 95% confidence interval 1.08–1.33) but not in the haemorrhoids cohort (0.90; 0.78–1.03). No other circulatory diseases showed significantly elevated risks associated with varicose veins or haemorrhoids. The rate ratio for coronary heart disease in the varicose veins cohort was 0.91 (95% confidence interval 0.88–0.95) and that in the haemorrhoids cohort was 0.98 (0.94–1.03).

We conclude that neither varicose veins nor haemorrhoids showed strong association, either positive or negative, with other circulatory diseases. There was a significant, but numerically modest, elevated risk of DVT associated with varicose veins. The risk of coronary heart disease in people with varicose veins was, if anything, a bit low. 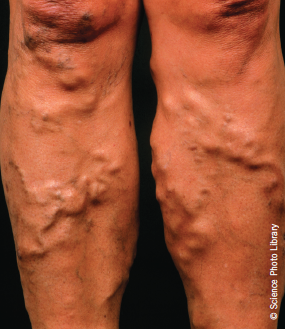 We used data from the Oxford Record Linkage Study (ORLS). The ORLS includes brief statistical abstracts of records of all hospital admissions, including day-case care, in National Health Service (NHS) hospitals, and all deaths regardless of where they occurred, in defined populations within the former Oxford NHS Region, from 1963 to 1999.3

The method will be described for the investigation of VV as a pre-existing condition and coronary heart disease (CHD) as an outcome. The same basic methods were used for studying each other circulatory disease after VV; and for studying each circulatory disease in people with haemorrhoids. A cohort of people with VV was assembled by identifying the first episode of care for VV as either a day case or inpatient at an NHS hospital. A reference cohort was constructed by identifying the first admission of individual patients in the ORLS for a range of common and generally fairly minor disorders (for details, see table footnotes). We followed the standard epidemiological practice, when hospital controls are used, of selecting a diverse range of conditions, rather than relying on a narrow range (in case the latter are themselves atypical in their risk of subsequent disease). This ‘reference’ group of conditions has been used in a number of other studies of inter-relationships between diseases.4-6 We searched the database for any subsequent NHS hospital admission or day-case care for CHD in the VV and reference cohorts. We excluded individuals for whom CHD was recorded either prior to, or at the first admission for, VV or reference condition. The diagnoses of VV, the reference conditions, and CHD were accepted as those coded on the hospital record abstract. Privacy regulations preclude access to the full records to study the criteria on which the diagnoses were based.

Comparison of males and females

The great majority of admissions for circulatory disorders were remote in time after the admission for VV (table 3) or haemorrhoids (table 4). Following VV, the rate ratios for most circulatory disorders were very similar in the first five years after admission and at longer time intervals than that (table 3). The exception was abdominal aortic aneurysm, which showed a significantly high rate ratio more than five years after, but not in the earlier period. Following haemorrhoids, a few rate ratios that were a little low in the first five years, such as that for pulmonary embolism, became a little higher in the later period but not higher than expected from the rates in the reference cohort.

The ORLS is a large dataset containing data over a long period of time. The ‘outcome’ diagnoses, the circulatory diseases, were recorded independently of the diagnoses of VV or haemorrhoids, and only brought together by record linkage. This avoids possible biases that might arise from studies in which the observer of each condition is not ‘blind’ to the presence of other conditions. It also avoids the possibility of recall and reporting bias which might occur in retrospective interview-based studies of people who have experienced CHD, stroke or other circulatory disease. We considered the possibility of surveillance bias in which, because an individual is under care for one disease (e.g. VV), other diseases (e.g. other circulatory disorders) may be identified. The fact that the majority of the cases of circulatory diseases were remote in time – the majority occurred five years and more after VV or haemorrhoids (tables 3 and 4) – reduces the likelihood of any systematic biases related to the hospitalisation of people for VV or haemorrhoids.

Our findings were confined to people who received day-case hospital care, or who were admitted to hospital, with VV or haemorrhoids. Nonetheless, it seems reasonable to assume that those admitted are at the severe end of the clinical spectrum of VV or haemorrhoids; and that, if VV or haemorrhoids are aetiologically associated with other circulatory diseases, the associations are most likely to be evident in those with severe VV or haemorrhoids. We considered the possibility that there may be differences between males and females in indications for treatment – for example, cosmetic reasons for women and severe symptoms for men with VV – that might themselves be related to risk of other diseases. Accordingly, we analysed the data for males and females separately as well as together. However, differences between men and women were small.

We lack information about the characteristics of the patients, other than their clinical diagnoses, and therefore lack information about risk factors (such as smoking) and potential confounding for the circulatory disorders studied. Most associations were not significantly different from one, even though numbers were large and statistical power was high. Close clustering around one would not be found if the study were hampered by unmeasured confounding. Furthermore, the highest value, and the only high that was statistically significant, was the association between VV and DVT, which is also the only one where there is a reasonably strong a priori hypothesis indicating that a significant association might be found.

The few previous studies of VV and CHD have produced conflicting results. The Kaiser-Permanente Epidemiologic Study of Myocardial Infarction reported that patients with VV and haemorrhoids were less likely than others to develop myocardial infarction.8 A more recent study found a reduced risk of CHD in men with VV.9 The prospective Framingham Study10 reported that, after adjusting for confounders, there were no significant associations between VV and CHD. Our study shows that in patients with pre-existing VV the risk of CHD was fractionally low.

Scott et al.9 have proposed that an inverse association between VV and CHD could be explained by increased oestrogen levels in people with VV. An alternative plausible explanation is that an inverse association may be due to differences in the smooth muscle component of the vasculature. In a histological study using VV samples from patients undergoing vein stripping, and controls from femoral-popliteal bypass operations, the former patients were demonstrated to have decreased smooth muscle in the tunica media but no difference in muscular content in other vascular wall layers.11 An in vitro study using venous samples from patients also showed decreased smooth muscle and disorganisation of the smooth muscle layers.12 In contrast to this change, it is well established that smooth muscle proliferation is a characteristic of the atherosclerotic disease process.13,14 Although it is plausible that in the above studies the controls may be unrepresentative of ‘normal’ veins, these histological changes should be considered as a potential mechanism. Future studies may be able to use control samples from young patients who have died of non-atherosclerotic related conditions.

Previous studies on the association between VV and DVT are few and, in particular, have focused on the post-operative risk of DVT in VV patients.15,16 Some case–control studies have demonstrated a positive association between VV and DVT, with similarly modest odds ratios to ours.17,18 An explanation for this association may relate to the alterations in blood flow and injuries to the vascular wall associated with VV. It is well established that one of the major complications of VV is superficial thrombophlebitis, usually with the presence of clots in the superficial venous system. It is possible, as one case series showed, that there is an increased risk of developing DVT (with or without VV) in patients with superficial vein thrombosis.19 An alternative explanation could be that some patients might develop VV subsequent to asymptomatic DVT and might thus be at elevated risk of further DVT.

Oral contraceptives have been contraindicated in patients with VV because of concerns about the possibility of an increased DVT risk, but the evidence on which this is based has been weak. A Royal College of General Practitioners study found a moderate additive effect of the presence of VV and the use of oral contraceptives on the risk of DVT, although there were only a small number of events.20 Our data provide some evidence to support a general increase in risk in people with VV. Further study is warranted to determine whether VV and other risk factors have multiplicative effects on the risk of venous thromboembolism.

To our knowledge, this is the first large study of any association between haemorrhoids and circulatory disease. Burkitt21 in the 1970s suggested that high levels of haemorrhoids, DVT and VV in the developed world were attributable to common processes that underlie each, notably low fibre intake and lack of vigorous physical exercise. Additionally, external haemorrhoids are associated with blood stasis in the enlarged vessels, which may predispose to thromboembolic diseases. Further, in both DVT and haemorrhoids an increase in mast cells has been demonstrated,22,23 although these associations have not been adequately explored.

We found a statistically significant but numerically modest elevation of risk of DVT associated with VV, which is the one association studied by us that seems already to have a reasonably firm base in accepted clinical practice. Apart from this, there was no evidence that VV and haemorrhoids are associated with raised susceptibility to other circulatory diseases.

This work was supported by the English National Institute of Health Research Co-ordinating Centre for Research Capacity Development, which funds the Unit of Health Care Epidemiology to undertake research using the linked data. The Oxford Record Linkage Study dataset was built under the direction of Leicester Gill.

Unlocking the potential of NOACs