Direct current cardioversion (DCCV) is a frequently used and effective strategy for the restoration of sinus rhythm in patients with atrial fibrillation (AF) that is persistent and of recent onset. It has been undertaken for almost 60 years.1 While thromboembolic events are associated with this procedure, prior anticoagulation reduces this risk to less than 1%.2 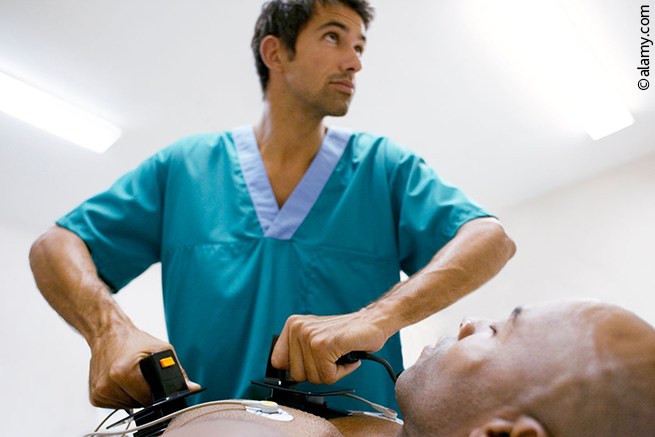 Anticoagulation is given to patients for at least three weeks prior to the procedure and maintained long term, unless they are at low future risk of stroke and systemic embolism (which is very few patients presenting for cardioversion), namely men with a CHA2DS2-VASc score of zero and women with CHA2DS2-VASc score of 1. In patients undergoing urgent cardioversion because of haemodynamic instability (which should be an uncommon occurrence) with or without pre-procedural transoesophageal echocardiography to rule out thrombus in the left atrium and its appendage, anticoagulation should be commenced at the time of the procedure and continued, thereafter, as above.

Anticoagulation for stroke prevention in AF has historically been with a vitamin K antagonist (VKA), such as warfarin – both for long-term thromboprophylaxis and, specifically, for patients undergoing DCCV. The strategy has limitations – there are often delays in decisions to prescribe anticoagulant drug therapy in the community, referral may need to be made to a primary care or hospital-based specialist anticoagulation service or perhaps, in some localities, a secondary care haematology or cardiology consultant clinic. These patients have then been commenced on warfarin often with a ‘slow-loading’ regimen with a resultant delay in achieving therapeutic anticoagulation. Confirmation of weekly international normalised ratio (INR) measurements above 2 for three consecutive weeks is necessary before the patient can undergo DCCV.

In marked contrast, as now practised in most, but by no means all, centres, is the use of the non-VKA oral anticoagulants (NOACs) for stroke prevention in patients with non-valvular AF, whether DCCV is to be considered or not, given the rapid onset of therapeutic anticoagulation, the absence of the need for routine monitoring of indices of anticoagulation and fewer significant drug or food interactions. Furthermore, the increasing confidence of physicians in primary and secondary care to use these agents has led to more patients receiving anticoagulation more quickly.

There is substantial and consistent evidence of the efficacy and safety profile of these newer agents in patients undergoing DCCV from post-hoc analyses of data from patients who underwent the procedure during the course of the large randomised-controlled trials (RCTs) comparing warfarin to each of the four licensed agents (table 1).

In each of the four RCTs, as anticipated, stroke and systemic embolic events were extremely infrequent, as was significant bleeding, regardless of anticoagulation strategy and no apparent differences regardless of which NOAC was used. Prospective data are now available for three of these agents – rivaroxaban, edoxaban and apixaban. Rivaroxaban has been assessed specifically in this setting in the X-VeRT (eXplore the efficacy and safety of once-daily oral riVaroxaban for the prevention of caRdiovascular events in subjects with non-valvular aTrial fibrillation scheduled for cardioversion) trial.9 In this study, designed to investigate the efficacy of rivaroxaban versus a VKA in patients undergoing DCCV, 1,504 subjects were randomised in a 2:1 ratio to receive anticoagulation with rivaroxaban (dose dependent on renal function) or a VKA. Cardioversion could be early (either TEE-guided or with adequate anticoagulation at the discretion of the investigator prior to randomisation10), in which case the anticoagulation was given one to five days prior to cardioversion, whereas those scheduled for a delayed strategy received anticoagulation for at least 21 days before the procedure.

The results of X-VeRT were similar to the non-randomised data from the RCTs, namely low numbers of events, both thromboembolic and bleeding – 0.51% of rivaroxaban-treated patients versus 1.02% in the VKA group (risk ratio 0.50; 95% confidence interval [CI] 0.15 to 1.73). In the early DCCV group, 0.71% of rivaroxaban-treated patients had thromboembolic events versus 1.08% in the VKA group, while with the delayed strategy, 0.24% of patients experienced a thromboembolic event compared with 0.93% in the VKA arm. With respect to bleeding events, there was no difference between the groups who experienced very few significant events: 0.6% of the rivaroxaban-treated patients had such events versus 0.8% of those treated with warfarin. The important difference, however, was the reduction in the time to cardioversion. Following the successful completion of  X-VeRT, the SmPC for rivaroxaban was updated to state that it can be initiated or continued in patients who may require cardioversion.

Further reassuring prospective data with another once daily NOAC, edoxaban, has recently been obtained from the ENSURE-AF (Edoxaban Versus Enoxaparin–Warfarin in Patients Undergoing Cardioversion of Atrial Fibrillation) trial, which has enabled the SmPC for edoxaban to be similarly updated, i.e. for initiation or continuation in patients who may require cardioversion. In this trial, 2,199 patients with non-valvular AF were randomised in a 1:1 manner to edoxaban (at a dose of 30 mg or 60 mg, as appropriate) or warfarin. They received either early (transoesophageal guided) DCCV with anticoagulation given just prior to DCCV or a delayed strategy with edoxaban versus an enoxaparin/warfarin comparator. The primary efficacy and safety end points of both groups were similar (and very low numerically).11

Recent results from EMANATE (Eliquis Evaluated in Acute Cardioversion Compared to Usual Treatments for Anticoagulation in Subjects with NVAF) support the use of apixaban in patients with AF undergoing cardioversion.12

Given these reassuring results, both post-hoc and prospective, and the emerging use of these agents nationwide as first choice for stroke prevention in AF, data are emerging from a number of centres on the use of NOACs prior to cardioversion. Colleagues from Inverness have published their early experience following the introduction of dabigatran into their clinical practice, and reported highly significant reductions in procedural rescheduling for inadequate anticoagulation in NOAC-treated patients with a resultant shortening of the time from initial assessment to DCCV.13 Others report similar findings in a rivaroxaban-treated cohort, but with an increase in procedural success accompanying the lessening of the time to DCCV from presentation.14 It is, as yet, uncertain whether this will extend into promoting longer-term maintenance of sinus rhythm and improved outcomes, but, nevertheless, NOAC therapy for thromboprophylaxis in AF is an increasingly common strategy and, arguably, the preferable approach in AF patients where scheduling of DCCV is likely.

Introduction
Anticoagulation in patients with non-valvular AF undergoing PCI: clinical evidence from PIONEER AF-PCI
The PIONEER AF-PCI study: its implications for everyday practice in the UK
The potential for NOACs in cardiac ablation in the UK

7. Flaker G, Lopes RD, Al-Khatib SM et al. Efficacy and safety of apixaban in patients after cardioversion for atrial fibrillation: insights from the ARISTOTLE trial (Apixaban for Reduction in Stroke and Other Thromboembolic Events in Atrial Fibrillation). J Am Coll Cardiol 2014;63:1082–7. http://dx.doi.org/10.1016/j.jacc.2013.09.062

10. Ezekowitz MD, Cappato R, Klein AL et al. Rationale and design of the eXplore the efficacy and safety of once-daily oral riVaroxaban for the prEvention of caRdiovascular events in patients with nonvalvular aTrial fibrillation scheduled for cardioversion trial: A comparison of oral rivaroxaban once daily with dose-adjusted vitamin K antagonists in patients with nonvalvular atrial fibrillation undergoing elective cardioversion. Am Heart J 2014;167:646–52. https://doi.org/10.1016/j.ahj.2013.12.024