Atrial fibrillation (AF) increases stroke risk fivefold. Oral anticoagulation (OAC) with warfarin reduces the risk of stroke by 64%. Direct oral anticoagulants are non-inferior to warfarin in preventing stroke in non-valvular AF, but have a lower risk of fatal intracranial haemorrhage. We determined how many patients discharged with a diagnosis of ischaemic stroke and AF were prescribed OAC, and established reasons for, and associations with, non-prescription of OAC.

All patients discharged with a diagnosis of ischaemic stroke and AF during the four-year period between 2013 and 2016 within NHS Highland were included in the study. Patients who started OAC after a period of treatment with antiplatelets were considered as being treated with OAC. Electronic patient records provided demographics, CHA2DS2-VASc and HAS-BLED scores and information on why patients were not started on OAC.

A total of 181 patients were discharged with a diagnosis of ischaemic stroke and AF over the study period: 52.5% (n=95) were female (p=0.45); 35.4% (n=64) were discharged without OAC. The median CHA2DS2-VASc score for patients not treated with OAC was 5 (interquartile range [IQR] 4–6). The median HAS-BLED score was 3 (IQR 2.5–4). There was no difference in rate of OAC prescription between men and women (67% vs. 62%, p=0.45). Patients 80 years of age or older were significantly less likely to be prescribed OAC on discharge than those under 80 years (54% vs. 76%, p=0.002). The two most common reasons for withholding OAC were concern over bleeding risk and falls. Patients treated at a hospital with a stroke unit were no more likely to be discharged on OAC compared with those treated at hospitals without a stroke unit (66% vs. 62%, p=0.64). Of patients not treated with OAC, 64% (n=41) were discharged on long-term antiplatelet drugs.

In conclusion, raising awareness of the relatively low risk of major bleeding, even in elderly patients and in those at risk of falls, might help increase OAC usage and reduce recurrent strokes. 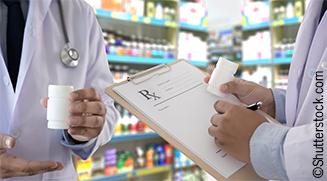 Atrial fibrillation (AF) increases an individual’s risk of stroke fivefold.1 Oral anticoagulation (OAC) with warfarin reduces the risk of stroke by 64%.2 Novel or direct oral anticoagulants are non-inferior to warfarin in preventing stroke in non-valvular AF and have a similar bleeding profile, but with a lower risk of fatal intracranial haemorrhage and several practical advantages.3-7 While several antiplatelet agents have been shown to reduce the risk of recurrent stroke, they are considerably less effective than OAC, with a similar risk of major bleeding, and, therefore, are no longer recommended in national guidelines for stroke prevention in AF.8

Data from the Scottish Stroke Care Audit showed that, in Scotland, 68% of patients discharged with a diagnosis of ischaemic stroke and a diagnosis of AF are discharged with OAC, or start OAC after their first outpatient clinic visit.12 Thus, 32% were not anticoagulated and, therefore, remained at high risk of recurrent stroke.

NHS Highland covers a large geographical area in the north of Scotland, with three main hospitals and one stroke unit. Whether there are differences between those hospitals with and without a stroke unit in terms of OAC prescription is unknown.

The aims of this case-series review were twofold. First, to determine how many patients discharged with a diagnosis of ischaemic stroke and AF were prescribed OAC, and, second, to establish reasons for, and associations with, non-prescription of OAC.

This is a retrospective case-series review.

NHS Highland is the largest geographical health board in the UK covering an area of 32,593 km2 with a dispersed resident population of around 320,298 – just over 6% of the total population.13 Of the three largest hospitals in NHS Highland (Raigmore Hospital, Caithness General Hospital and Belford Hospital), only Raigmore Hospital has a designated stroke unit.

All patients discharged with a diagnosis of ischaemic stroke and AF during a four-year period between 2013 and 2016 within NHS Highland were included in the study. Patients were identified using data from the Scottish Stroke Care Audit.12

All data were collated and recorded in Microsoft Office Excel 2010. Statistical tests and graphs were performed using GraphPad Prism (Version 5, GraphPad Software, San Diego, CA, USA). Descriptive statistics were used to characterise the sample. D’Agostino-Pearson (omnibus K2) normality test was used to determine if data were from a Gaussian distribution. Mean and standard deviation (SD) were used for parametric data and median and interquartile range (IQR) for non-parametric data. Mann-Whitney U-test was used for all statistical analysis comparing categorical data.

Stroke unit and year of discharge

Patients at Raigmore Hospital (which has a stroke unit) were no more likely to be discharged on OAC compared with those at Caithness and Belford hospitals (which have no stroke unit) (66% vs. 62%, p=0.64).

Of the patients who were not treated with OAC, 64% (n=41) were discharged on long-term antiplatelet therapy.

In our population, 36% of patients with AF did not receive OAC after an admission with stroke. This finding was similar to that in the national Scottish Stroke Care Audit (32%).12  This current case review describes why OAC was not prescribed on discharge in our patients with AF.

The main concern around long-term use of OAC was the risk of major bleeding and falls. Previous studies have shown that concerns over falls risk is the main reason for withholding OAC in elderly patients with AF.14 It is, therefore, not surprising that concerns over high bleeding risk and falls risk were the most commonly cited reasons for withholding OAC. However, although falls risk remains a concern for physicians when making decisions on OAC, this is not supported by published evidence. A prospective study, involving 515 patients discharged on warfarin, did not show any increase in bleeding among those at high risk of falls.15 Another study has suggested that the risk of subdural haematoma from falls in elderly patients on warfarin is almost negligible.16

The patients in whom OAC was withheld had a median CHA2DS2-VASc score of 5, equating to an annual stroke risk of 6.7%.8 The median HAS-BLED score was 3, equating to a bleeding risk of 5.8%, since many of the non-modifiable risk factors for stroke and bleeding are the same.10

Despite concerns around the use of oral OAC and bleeding risk, the majority of patients who were not prescribed OAC were discharged on long-term antiplatelet therapy. This warrants review, as it is well established that antiplatelet drugs are significantly inferior to OAC in preventing stroke in patients with AF.1,9,17 The BAFTA (Birmingham Atrial Fibrillation Treatment of the Aged) trial randomised 973 patients over the age of 75 with AF to warfarin or aspirin.17 As well as demonstrating superiority of warfarin over aspirin in preventing stroke or death, the study also found no difference in the incidence of major haemorrhage between the two groups. This finding was also seen in a randomised-controlled trial comparing warfarin with aspirin in all patients with stroke, which found no increase in major bleeding but a significant increase in minor bleeding (20.8 vs. 12.9 minor bleeds per 100 patient-years).18 A meta-analysis comparing warfarin and aspirin in patients with AF demonstrated a modest increase in major bleeding risk with warfarin (2.2 vs. 1.3 events per 100 patient-years).19

Furthermore, non-prescription of OAC is strongly associated with increased mortality. An observational study of 1,459 older patients in the US with stroke and non-valvular AF found 42.5% of those not receiving OAC had died versus 19.1% of those treated with OAC, one year after discharge.20

While the decision on whether to start OAC in patients with AF needs to be made on an individual basis, the findings from this study suggest that there is considerable concern among physicians about prescribing OAC to elderly patients, who would otherwise benefit from the reduction in risk of a further stroke. Despite evidence of inferiority to OAC in terms of stroke prevention, most of these patients were treated with either aspirin or clopidogrel long term. It is likely that in older patients the co-administration of antiplatelet and OAC is more likely to result in major bleeding. Historically, in patients with pre-existing coronary artery stents, there may be a tendency to favour antiplatelet therapy over a combination of antiplatelet and OAC. However, current European Society of Cardiology (ESC) guidelines recommend that in patients one year distant from coronary artery stent placement, OAC can be prescribed as monotherapy, where there is a long-term indication for OAC.21

This current study did show a trend to increased OAC in more recent years, and this may be seen as encouraging, however, non-prescription remains high, despite several local presentations and internal audits. This perhaps reflects a need for a cultural change around OAC prescription in older patients at risk of falls.

The findings in this study are likely to be an under-representation of the true number of patients at risk of recurrent stroke from AF, since current practice does not include prolonged arrhythmia monitoring in patients with cryptogenic stroke in sinus rhythm. It is estimated that with prolonged monitoring a further 9% of all patients would be identified as having AF.22 This was a single-region study, however, the population studied is likely to be similar to the rest of the UK, and the results of the local audit were close to those in the Scottish Stroke Care Audit.

There would appear to be a need for an increased awareness among physicians treating elderly patients with stroke of the evidence for risk and benefit of antiplatelets agents and OAC. While it is encouraging that there was a trend towards increased prescription of OAC over the course of the last four years, current practice remains unduly conservative with regard to OAC prescription. Prescribers should be challenged about their perception of risk, and how this is communicated effectively with patients, to achieve a reduction in recurrent stroke risk.

This was a service evaluation using routinely collected data and, therefore, formal ethical approval was not required. Local Caldecott approval was obtained to use patient’s data.

14. Dharmarajan TS, Varma S, Akkaladevi S et al. To anticoagulate or not to anticoagulate? A common dilemma for the provider: physicians’ opinion poll based on a case study of an older long-term care facility resident with dementia and atrial fibrillation. J Am Med Dir Assoc 2006;7:23–8. https://doi.org/10.1016/j.jamda.2005.08.002

Can too much exercise be dangerous: what can we learn from the athlete’s heart?