In order to determine the taking of regular aspirin within a representative community sample of adults residing in the south Wales county of Caerphilly, we conducted a survey of a sample 9,551 adults resident in the county aged ≥18 years.

The prevalence of prophylactic aspirin taking by persons who have had a vascular event should be increased, particularly in women. Knowledge of the benefits and the risks of aspirin prophylaxis could be promoted through the community and there should be ongoing monitoring of aspirin taking. 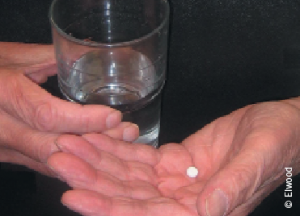 Daily low-dose aspirin (75–100 mg per day) substantially reduces the risk of subsequent vascular events, such as myocardial infarction and ischaemic stroke.1 Evidence from primary prevention trials has indicated a reduction in the risk of a first vascular event,2 but the benefit–risk balance for this is open to debate.3

The prevalence of aspirin taking by patients at increased vascular risk and by the general population is unknown in the UK. The following reports a survey to determine the taking of regular aspirin within a representative community sample of adult individuals in the south Wales county of Caerphilly.

The Caerphilly Health and Social Needs Study4 was a postal questionnaire survey of 22,236 individuals randomly sampled from the 132,613 residents aged 18 years and over in May 2001 in the county of Caerphilly. Of the 22,236 questionnaires posted, 12,408 were returned, giving an adjusted response rate of 62.7%, after removal of questionnaires sent to incorrect addresses. A follow-up questionnaire was sent to the 9,551 baseline respondents identified as still living in the county using the NHS Administrative Register in August 2008.

Five questions on aspirin taking were included, with the aim being to ascertain the prevalence of aspirin taking throughout the community and the reasons for taking the medicine or for not taking it. Four questions on the occurrence of prior vascular disease events were assessed to estimate aspirin taking in these groups. The nine specific questions are presented separately in table 1.

Questionnaires were returned by 4,798 individuals, giving a response rate of 53%. From these 240 (5%) were removed as their age or sex was different to that recorded in the NHS Administrative Register. The mean age of the other respondents was 56 years and 42.8% were male. Table 2 presents a summary of the prevalence of aspirin taking within the respective age groups and also according to whether or not a previous vascular event had been experienced.

A total of 98 (18%) of the 533 subjects who indicated that they had experienced a previous vascular event stated that they could not take aspirin. In free text answers, 43 of these stated that they were taking warfarin, 12 said they were sensitive to aspirin and 22 either experienced gastric irritation from the drug or had a peptic ulcer. Five subjects gave reasons related to bleeding but it was not possible from their responses to judge whether they avoided aspirin because of a fear of bleeding, or had experienced a bleed that had been attributed to aspirin.

Aspirin is of undoubted benefit in patients who have had a vascular event, and it is concerning, therefore, that the prevalence of aspirin taking in those who had a previous vascular event was 68% (95% CI 63%–73%) in men and significantly lower in women at 55% (95% CI 49%–61%). In a similar survey conducted in 2003 in patients in primary care practices across Wales, a compliance rate of 72% (95% CI 46%–84%) was found in post-infarct patients.5 Given the introduction of the Primary Care Contract in the interval, this lack of improvement is a matter of concern.

Aspirin prophylaxis has been recommended for all individuals over the age of about 50 years7,8 and the prevalence of aspirin taking by individuals over this age that had not had a prior vascular event was 23%. This appears lower than the estimate of 36% made in a survey in the USA for individuals aged 35–64 years.6

While the treatment of disease is the responsibility of physicians and other healthcare professionals, the preservation of health is ultimately the responsibility of the individual.9 Aspirin is readily available ‘over the counter’ in most countries and one of the responsibilities of those in healthcare is to make the risks and benefits of prophylactic measures, including medicines, clear and readily available. This is to ensure that individuals are equipped to make a well-informed decision. Another factor in this may be the self-evaluation of possible outcomes.

The data we present are limited in that they relate only to a small community within the UK. Clearly, data from a much wider survey would be of value, if evidence from this were complemented with data on hospital admissions attributable to aspirin to assess the undesirable side effects of the medicine. Furthermore, evidence on aspirin taking now may become of increased value and interest if aspirin is promoted for use in screening procedures for colon polyps and for persons with other evidences of an increased cancer risk.10 A key finding of this study is the prevalence of prophylactic aspirin taking by persons who have had a vascular event can be increased, particularly in women. Knowledge of the benefits and the risks of aspirin prophylaxis should be promoted through the community and there should be ongoing monitoring of aspirin taking.

The Caerphilly Health and Social Needs Study is funded by the Welsh Assembly Government/MRC Health Research Partnership Award. All the authors read and approved the final manuscript. Peter Elwood and Gareth Morgan were responsible for the questions about aspirin taking and vascular disease and for writing the paper. David Fone, Frank Dunstan and James White carried out the survey, Janet Pickering analysed the data and Clive Mitchell assisted in the interpretation of the results. Michael Martin also assisted in the analysis of the data.

Current management of the patient with high lipoprotein(a)

Primary prevention aspirin among the elderly: challenges in translating trial evidence to the clinic