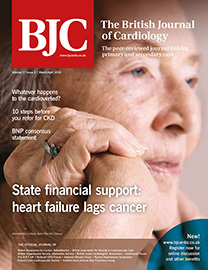 In this issue, Sandler’s paper (see pages 86–8) reinforces the growing body of evidence that should lead to the demise of the routine use of direct current cardioversion (DCCV) for patients with atrial fibrillation. This interesting paper highlights several issues surrounding DCCV within the context of a service re-design within a district general hospital. Despite a state-of-the-art service, the success of DCCV was limited, with sinus rhythm maintained in between the stated 20% (22/110) or even optimistically 40% (22/55) at around one year. I would suggest that this is unacceptable and that we would not allow any other procedure with significant associated morbidity to be undertaken with such a low chance of succeeding.

Until recently, supportive and palliative care for patients with heart failure has been neglected in primary and secondary care. Patients dying from cancer have benefited from a co-ordinated approach to ensure all aspects of care, including advanced planning and financial assistance, are considered.

Plasma natriuretic peptide (NP) testing is not widely used in heart failure clinical practice in the UK or Ireland, despite a large evidence base. This article reports the views of a consensus group that was set up to develop guidance on the place of NP testing for clinicians in primary and secondary care.

10 Steps before you refer for Chronic Kidney disease

Chronic kidney disease (CKD) has been redefined by the American National Kidney Foundation with stages based on the estimated glomerular filtration rate (eGFR) or other evidence of kidney abnormality.(1) Five stages were originally described by the Kidney Disease Outcomes and Quality initiative.

Whatever happens to the cardioverted? An audit of the success of direct current cardioversion for atrial fibrillation in a district general hospital over a period of four years

Direct current cardioversion (DCCV) to restore sinus rhythm (SR) in patients with persistent atrial fibrillation (AF) remains a therapeutic option, though recent studies have questioned its need and value in the longer term.

Audit of management of atrial fibrillation at a district general hospital

Atrial fibrillation (AF) is the most common cardiac arrhythmia and is a major risk factor for stroke. The 2006 National Institute for Health and Clinical Excellence (NICE) guidelines on management of AF recommended the use of beta blockers and calcium channel blockers in preference to digoxin for first-line rate control and emphasised the importance of appropriate thromboprophylaxis.

Coronary angiography is commonly performed via the right femoral artery. Under local anaesthetic, the arterial lumen is initially cannulated with a wide-bore needle, then a long and soft J wire is inserted through the needle. The needle is then removed, and an arterial sheath is passed over the wire using a Seldinger technique.

Cardiac sarcoid remains a notoriously difficult to diagnose condition and arrhythmias remain an important initial presentation. It is amenable to treatment therefore it is important to make an early diagnosis to reduce morbidity and mortality.

The National Institute for Health and Clinical Excellence (NICE) has issued new guidance on the prevention of venous thromboembolism (VTE) in patients admitted to...

The National Institute for Health and Clinical Excellence (NICE) has issued a draft guidance on the new anti-arrhythmic drug, dronedarone, saying it does not...

What is the best blood sugar level in diabetics? –New UK data

A new UK study has suggested that both very low and very high blood sugar levels in type 2 diabetes are associated with increased...

Cardiovascular services in London – the case for change

A new meta-analysis has suggested that use of statins slightly increases the risk of developing diabetes. The analysis – published in the February 27th...

“Doctor knows best”… Perhaps; but which one?

A report from the fourth Annual Scientific Meeting of the Cardiorenal...