News from the world of cardiology 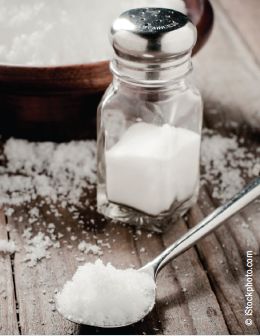 A new European study has caused controversy by suggesting that lowering salt intake may not be beneficial. The study, published recently in JAMA (May 4th 2011 issue), was conducted by a team from the University of Leuven, Belgium.

They followed 3,681 participants who
were free of cardiovascular disease at baseline for a median of 7.9 years, and found an inverse relationship between cardiovascular deaths and 24-hour sodium excretion (which correlates to salt intake), although systolic blood pressure was higher with higher salt intake.

But an editorial in the Lancet (May 12th 2011 issue) criticises the study, describing it as “disappointingly weak”. The editorial continues: “It is dangerous to jump to conclusions on the basis of single studies and ignore the totality of evidence…At a time when cardiovascular disease is the world’s leading cause of death and excess dietary sodium has been convincingly shown to be a serious public-health hazard, the results of this work should neither change thinking nor change practice.”

The number of heart transplants conducted in the UK has fallen by almost half in the past 10 years, according to figures published in the BMJ (BMJ 2011; 342:d2483).

This contrasts with the US and Europe where heart-transplant rates are steady or increasing marginally, the report says. One explanation for the UK decline could be the relatively small number of intensive care unit beds available.

The antiplatelet agent ticagrelor (Brilique®, AstraZeneca) has been accepted by the Scottish Medicines Consortium (SMC) for the prevention of atherothrombotic events in patients who have had a myocardial infarction or an episode of unstable angina. This includes patients managed medically, or those who are managed with percutaneous coronary intervention (PCI) or coronary artery bypass grafting (CABG).

Within Scotland there are an estimated 260,000 people who are suffering or have suffered from angina, 140,000 who have had a myocardial infarction (MI) and 15,500 admissions to Scottish hospitals for MI in 2008. Guidance for England and Wales from the National Institute for Health and Clinical Excellence (NICE) on ticagrelor is expected later this year.

Positive opinion for dabigatran in AF

The European Medicines Agency (EMA) has issued a “positive opinion” for dabigatran (Pradaxa®, Boehringer Ingelheim) for the prevention of stroke/systemic embolism in patients with atrial fibrillation (AF). This is based on the RE-LY trial in which dabigatran was superior to warfarin for this indication. Final approval is expected in June.

According to the proposed new indication listed on the EMA website, dabigatran would be marketed in the 110 mg and 150 mg strengths. It would be indicated for the primary prevention of stroke and systemic embolism in adult patients with nonvalvular AF with one or more risk factors — namely, previous stroke, transient ischaemic attack, or systemic embolism; left ventricular ejection fraction <40%; symptomatic heart failure (New York Heart Association class 2); age >75 years; and/or age >65 years associated with one of the following: diabetes mellitus, coronary artery disease, or hypertension.

Meanwhile subgroup analysis of the RE-LY study presented at the recent American College of Cardiology meeting in New Orleans, USA, has shown that debigatran is more effective than warfarin in stroke prevention for patients with AF, regardless of the risk of stroke (measured using the CHA2DS2VASc score) or the type of AF (paroxysmal, persistent, permanent).

ARBs do not increase MI

A new review of 37 trials including a total of 147,000 patients has found no evidence of an increased risk of myocardial infarction (MI) associated with the use of angiotensin-receptor blockers (ARBs).

For the current review, the researchers, led by Dr Sripal Bangalore (New York University School of Medicine, USA) included all randomised clinical trials comparing ARBs with controls (placebo or active treatment) with follow-up of at least one year, and reporting clinical outcomes. They performed both an intention-to-treat meta-analysis, and a trial sequential analysis, which takes into account the sample size.

Results showed that compared with controls, ARBs were not associated with an increase in the risk of MI (relative risk 0.99). And they were associated with a reduction in heart failure (RR 0.87), new-onset diabetes (RR 0.85), and stroke (RR 0.90).

The researchers point out, however, that despite lower blood pressure compared with placebo, there was no detectable beneficial effect for the outcome of MI or cardiovascular mortality. Thus ARBs, unlike ACE inhibitors, seem not to have any special ‘cardioprotective’ effects, even when compared with placebo.

One preventable death from cardiovascular disease (CVD) occurs in Europe every four minutes, according to results presented at the recent EuroPRevent conference in Geneva, Switzerland.

EURIKA (The European Study on Cardiovascular Risk Prevention and Management in Daily Practice) found that poor management of risk factors including hypertension, hyperlipidaemia, smoking and diabetes accounts for nearly 30% of the risk of CVD death, equating to approximately 135,000 deaths each year.

Research citing coffee consumption as a potential risk factor for hypertension and stroke has been disputed by a statement from the British Coffee Association (BCA).  They point out that the study by Dr Monique Vlak et al, published recently in Stroke, (doi: 10.1161/STROKEAHA.110.606558) lists ‘anger’, ‘sexual intercourse’, and ‘straining for defecation’ as factors all having a greater influence on risk of subarachnoid haemorrhage. The BCA claims coffee had one of the lowest relative risks compared with all risk factors studied in the paper.

The NHS is leading the world in monitoring and preventing venous thromboembolism (VTE) in hospital patients,  according to Health Minister Lord Howe.

Speaking at a meeting hosted by the All-Party Parliamentary Thrombosis Group (APPTG), the minister said that reducing VTE was a chance “to reduce the suffering of thousands of people and to save a great many lives,” praising cooperation within the NHS of junior doctors, nurses, pharmacists and GPs.

Praising the NHS’ transparency on clot prevention, he continued: “The aim of the system is to see that every patient admitted to hospital has had a risk assessment and appropriate prevention. While the NHS still has some work to do to achieve this, the initial results are impressive – the numbers of hospitals achieving the target of 90 per cent of patients assessed virtually trebled between July and December, from 18 to 53. The NHS in England is the only health system in the world to implement such a comprehensive system at a national level.”

…..and new drug approved in Japan for VTE

A new factor Xa inhibitor, edoxaban (Lixiana®), has recently been approved for the treatment of VTE in patients with total knee arthroplasty, total hip arthroplasty and hip fracture surgery in Japan.  This is the first marketing approval for this new once-daily oral anticoagulant, which has been developed by Daiichi Sankyo.  It is currently being evaluated in an ongoing global clinical development programme in several indications including stroke prevention in patients with atrial fibrillation, and the treatment and prevention of recurrent VTE.

Commissioners must design services to both improve outcomes for patients with chronic kidney disease (CKD), and to help the NHS make better use of its resources, according to the latest in a series of good practice commissioning guides from the National Institute for Health and Clinical Excellence (NICE).

Building on the NICE clinical guideline and the quality standard on CKD, the commissioning guide – Illustrated with examples from the NHS – identifies the potential benefits of an effective, integrated service for the early identification and management of CKD in adults, which would also help reduce the risks of other vascular events, such as stroke and cardiac failure.

The full guidance can be found at: http://egap.evidence.nhs.uk/CMG37/contents

Sildenafil citrate (Revatio®, Pfizer) has been approved for the treatment of pulmonary arterial hypertension (PAH) in children aged one to 17 years by the European Commission.  The Commission’s approval was based on the results of a dose-ranging phase III multi-centre, global study that evaluated its efficacy and safety versus placebo in 234 patients.

The phosphodiesterase inhibitor was first approved for the treatment of adult sufferers of PAH in 2005. For paediatric patients, sildenafil will be available as an oral suspension.

We are delighted to welcome Professor Philip Steer to our editorial board. Professor Steer is a consultant obstetrician at the Chelsea and Westminster Hospital, London, with a long and distinguished career. He has published widely in international journals and textbooks, being editor of one of the world’s leading textbooks on high-risk pregnancy, as well as being editor-in-chief of the British Journal of Obstetrics and Gynaecology. He is a past president of the British Association of Perinatal Medicine, and of the obstetrics and gynaecology section of the Royal Society of Medicine. Through his work in antenatal clinics, he has developed a special interest in cardiac disease.