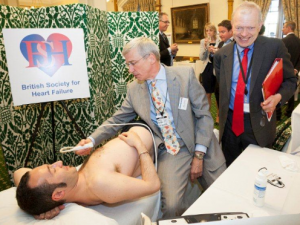 Professor Andrew Clark (President of the British Society for Heart Failure) is pictured here (centre) carrying out an echocardiogram in the House of Commons. He was at a BSH event to help raise awareness that a person diagnosed with heart failure is likely to have a worse prognosis than if they were diagnosed with most cancers. This is despite the availability of specialist heart failure services that can have a remarkable impact on a patient’s chance of survival, but for which there is inconsistent access over the UK leading to wide variations in care and outcomes. Over 60 MPs, Peers, and professional and patient groups have now signed a pledge that every patient should have access to a specialist heart failure service, wherever they live in the country.

With regret we report the recent death of Professor Stewart Hillis (Consultant Cardiologist and Professor of Cardiovascular and Exercise Medicine, University of Glasgow).

Stewart was a long-serving BJC editorial board member and one of the most popular figures in British cardiology. He had also been the Scottish Football Association’s medical advisor and doctor to Clydebank and Rangers football clubs. He will be sadly missed and our sympathies are with his wife Anne, and family.

World Heart Day will take place this year on 29th September 2014. This year’s emphasis will be on creating heart-healthy environments. The campaign has been chosen as very often people are “trapped” in environments that predispose them to cardiovascular disease, says the World Heart Federation. “For them there are limited options to choose a healthier lifestyle,” the statement adds.

Have you switched to BJC digital yet? Two lucky winners in our prize draw, Ms Hannah Manos (Culm Valley Integrated Centre for Health) and Professor John Somauroo (Countess of Chester NHS Trust) switched to digital and have now won a portable heart monitor for their practice.

Two more AliveCor portable heart monitors will be given away to UK health practices each quarter. Our draw is open to all UK healthcare professionals who currently receive a print copy of the journal, and wish to switch to a digital-only subscription. To enter, please sign up by going to the BJC website https://www.bjcardio.co.uk/ and click on the ‘Register’ tab. Enter your details, and add “switch” in the box when prompted.

Users who are already registered on our website and wish to enter the draw should log in as usual above and click on ‘Amend your profile’. Enter “switch” in the box when prompted. Ensure you click ‘Update your profile’ at the bottom of the page before exiting.

Defibrillators and exercise in young people

The difficult question of whether it is safe to play sports with an implantable cardiac defibrillator (ICD) is itself being questioned following research presented at the German Cardiac Society’s annual conference. Current guidelines from the European Society of Cardiology and the American College of Cardiology prevent people with ICDs or pacemakers playing any kind of competitive sport more strenuous than golf or bowling (class 1A sports).

Dr Karin Nentwich (Bad Neustadt, Germany), however, believes that while participating in some sports can pose an increased risk of arrhythmia, this must be weighed against the health benefits these patients derive from exercise. In her view, the risk to ICD patients can be minimised by using an optimal implantation technique, individualised programming of the device, advance testing under stress and regular follow-up observations of the patient, especially by continuous remote follow-up using remote monitoring technologies.

Women have longer stays and are more likely than men to die after a myocardial infarction (MI), according to a study from Yale School of Medicine published in the Journal of the American College of Cardiology (21st July issue).

A total of 230,684 hospitalisations for MI in patients aged from 30–54 were analysed in the study. It found younger women were a vulnerable, understudied group with worse cardiac risk profiles and worse outcomes post-MI compared with younger men.  Although men were more likely to have high cholesterol, women – especially black women – were more likely to have hypertension, diabetes and heart failure.

It concluded that younger women may benefit from more aggressive control of modifiable cardiovascular risk factors.

One in 10 foods labeled as low-fat contain the same or more calories as the regular fat versions, according to a study presented at the recent European Congress on Obesity in Sofia, Bulgaria.

In a study of 62 products – where only four of 10 UK supermarkets had sufficient nutritional information on labels for the study to be carried out – researchers found that, compared to regular fat products, on average 31% of the low-fat products had less calories, while 10% had the same or more calories. Some 60% of the products had less sugars than the regular fat alternatives.

Meanwhile a study published in The Lancet (doi: 10.1016/S0140-6736(14)60460-8) shows that worldwide obesity and overweight levels have increased from 857 million in 1980 to 2.1 billion in 2013. The Global Burden of Disease study shows that around a quarter of the adult population in the UK are obese. The highest levels of obesity in the world are in the USA, which accounts for over 13% of worldwide obesity.

The first topical cream for the treatment of erectile dysfunction (ED), suffered by 2.3 million men in the UK, is now available on prescription. Alprostadil (Vitaros®, Takeda) is normally given as an injection and the cream will enable many more men to receive an appropriate treatment.

Three Takeda diabetes products have received positive opinions from the Committee for Medicinal Products for Human Use (CHMP) of the European Medicines Agency (EMA) for updates to the summary of product characteristics (SMPC). If adopted by the European Commission, this will lead to demonstrated cardiovascular (CV) safety outcomes data for alogliptin being included in its labeling.

The updates are for alogliptin (Vipidia™), alogliptin and metformin (Vipdomet™), and alogliptin and pioglitazone (Incresync™) and follow results from recent clinical studies, such as EXAMINE (EXamination of cArdiovascular outcoMes with alogliptIN versus standard of carE in patients with type 2 diabetes mellitus and acute coronary syndrome), where safety outcome data showed comparable incidences of CV death, non-fatal myocardial infarction and non-fatal stroke in type 2 patients treated with alogliptin, active control or stroke.

More stroke patients could benefit from thrombolysis if it is given as quickly as possible after the first signs of illness, according to a meta-analysis published in The Lancet (doi: 10.1016/S0140-6736(14)60584-5).

The meta-analysis involving more than 6,700 stroke patients showed that emergency treatment with alteplase improves the chances of good survival if it is given within 4.5 hours of symptom onset. Its benefit diminishes the later it is given.

Data from nine randomised trials with alteplase in the treatment of acute ischaemic stroke were included in the meta-analysis. The odds of a good stroke outcome were 75% greater for patients given alteplase within three hours of initial stroke symptoms, compared with those who did not receive the drug; for those given the drug between three and 4.5 hours post-stroke there was a 26% increased chance of a good outcome; while for those with a delay of more than 4.5 hours in receiving treatment, there was just a 15%, not statistically significant, increase in the chance of a good recovery.

The benefits of alteplase were seen in all the patient groups studied; some 1,729 of the 6,756 patients were older than 80 years of age; patients with mild and severe strokes were also included.

Apixaban (Eliquis®, Bristol Myers Squibb/Pfizer) has received European Commission approval for the treatment of deep vein thrombosis (DVT) and pulmonary embolism (PE) and prevention of recurrent DVT and PE. This approval further broadens the clinical use for apixaban.

The approval is supported by results from the AMPLIFY and AMPLIFY-EXT studies: AMPLIFY showed apixaban was non-inferior for VTE/VTE-related death and was superior to enoxaparin/warfarin in the safety end point of major bleeding; AMPLIFY-EXT showed apixaban to reduce recurrent VTE/all-cause death with no significant difference in major bleeding events compared to placebo.

He is looking forward to further developing the work of the BJCA on cardiology training and to building relationships with cardiology subspecialty organisations, such as the British Society of Echocardiography with whom the BJCA jointly collaborated last year. He also hopes the forthcoming European Society of Cardiology congress taking place in London in 2015 will bring opportunities for collaborations with similar European organisations.

For more information on the BJCA, visit http://www.bcs.com/bjca/